This year's Ice Exercise was nothing new of the Seawolf-class fast-attack sub USS Connecticut, which also participated in the 2018 version of the biennial Arctic exercise 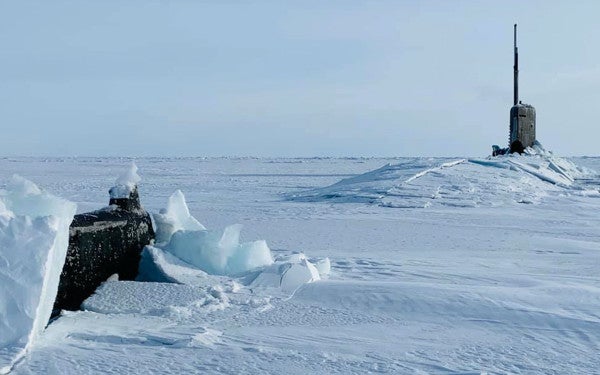 This year's Ice Exercise was nothing new of the Seawolf-class fast-attack sub USS Connecticut, which also participated in the 2018 version of the biennial Arctic exercise.

The 2018 iteration started just weeks after the Defense Department released its National Defense Strategy, which cited the reemergence of “long-term, strategic competition” with “revisionist powers” — namely, China and Russia — as the central challenge to U.S. security.

“The Arctic is a potential strategic corridor — between Indo-Pacific, Europe, and the U.S. homeland — for expanded competition,” and ICEX 2020 was an opportunity for the Navy's Submarine Force to “demonstrate combat and tactical readiness” for sustained operations in the challenging environment there, sub force commander Vice Adm. Daryl Caudle said when the exercise began.

That competition was on display when Connecticut and Los Angeles-class fast-attack sub USS Toledo surfaced on an ice floe near Camp Seadragon, the exercise's temporary base, named for the first sub to sail through the Northwest Passage and under an iceberg.

On March 9 and March 14, Russian Tu-142 maritime reconnaissance planes flew through the area, lingering near the camp and the subs, accompanied by U.S. and Canadian fighter aircraft, which scramble frequently for such missions.

Related: U.S. and Canadian fighter jets intercepted Russian reconnaissance planes as they lurked over a submarine exercise in the Arctic

Those encounters underscore the need “to be able to react appropriately” to send a strategic message and to “actually defeat any threats” should they arise, Air Force Gen. Terrence J. O'Shaughnessy, head of U.S. Northern Command, said days later.

Down on the ice, however, the Russian presence didn't interrupt the work at hand.

“We were aware of the overflights,” the Connecticut's commanding officer, Cmdr. Cameron Aljilani, told Insider in an interview at the end of May. “It did not affect any of the operations we were conducting.”

'The Arctic Circle is a first for me'

Navy subs have done more than 100 Arctic exercises over the past 70 years, dating back to August 1947, when the USS Boarfish made the first under-ice transit of an ice floe.

But this year's version of the exercise, centering on an ice floe 150 miles north of Prudhoe Bay on Alaska's North Slope, was a first for Aljilani.

“I've operated in the Western Pacific as far west as Singapore, as far south as Australia,” Aljilani said. As executive officer on East Coast-based Virginia-class attack sub USS North Dakota, Aljilani sailed as far east as the Mediterranean Sea, but, he said, “going north to the Arctic Circle is a first for me.”

Aljilani took command of the Connecticut in August 2019, and even though he was new to this kind of exercise, his crew was not.

“I was fortunate,” Aljilani said. “Some of my department heads were here two years ago as well as about 40% of my crew. So that local, resident knowledge was very effective in making me successful.”

The Navy's Arctic Submarine Laboratory, based in San Diego, is the lead organization for ICEX and has the service's resident experts on Arctic operations.

“They maintain our tactics, techniques, and procedures, and during my transit and then up at the ice camp we had Arctic operations specialists, we call them ice pilots,” Aljilani said. “They embarked on the ship, and they helped us as we navigated through the Bering Strait and up into the Arctic.”

The Lab set up on a moving ice floe to provide a platform where a tracking range, sensors, communication equipment, and personnel could be safely moved to and from the subs taking part.

Personnel from Canada, Norway, the UK, and Japan were also on hand for the exercise, shortened this year to three weeks from five in 2018 and 2016.

Related: A Navy submariner explains the fine art of smashing through Arctic ice

The Connecticut surfaced about a mile from the camp, Aljilani said. “They were able to have these really interesting planes that could take off in like 150 yards. It was pretty amazing. So they would fly from ice camp” and land about 100 yards from the sub.

The Connecticut took on some distinguished visitors during the exercise, but it didn't take on cargo since it had a maximum load of food and parts — “so much food the crew was walking on cans … of food throughout the ship,” Aljilani said — as part of endurance tests that including keeping radio silence and doing repairs at sea.

The exercise took place in early March, before the novel coronavirus pandemic (COVID-19) had rapidly expanded across the US. But the sub still took health precautions.

“When we started to get information about the coronavirus as we were on our transit up to the Arctic and as personnel were coming on board, they were screened in accordance with CDC guidance at the time,” Aljilani said.

“Personnel were screened when they got on board and then they debarked, and then we were instituting our own screening protocols on board after the fact with no displays of symptoms.”

The Navy's most capable subs

The Connecticut, commissioned in 1998, is one of only three Seawolf-class subs, along with the USS Seawolf and the USS Jimmy Carter. The subs were designed to be the Navy's most capable in order to stay ahead of Soviet technology, but the service stopped building them after the Cold War ended.

But the Connecticut's sophisticated features, included with the Cold War in mind, still make it uniquely suited for Arctic operations.

“We have an improved sail that allows us to surface through the ice,” a feature that has been included on Virginia-class subs, Aljilani said.

The sub also has a “very capable” sonar system. “I would say that's the capability that they made the best possible to go up there,” Aljilani added. “When we went up … two years ago, we had a version of the sonar system that now is about four, five years old, and we just got an upgraded system over our past dry-docking availability” in mid-2019.

The sonar system, like other technology on the sub, is constantly upgraded, and that “ability to continually update us technically makes it easier for us to” operate in the Arctic, Aljilani said.

As suited as those systems are for the Arctic, the sailors manning them still need training for the conditions there, which are markedly different from those in other parts of the world.

“We have shore-based simulators that can model how the ship will react” to differences in salinity and temperature and other factors, Aljilani said.

Nor is the vertical surfacing that subs do during ICEX part of the standard submariner skill set. “Normally we would ascend to periscope depth having speed in the water. Due to under-ice operations, you can't be moving forward. You have to go up at zero speed and straight to the ice. That's one thing that we would practice,” Aljilani said.

Similarly, dealing with the ice canopy requires special preparation, including training to spot ice pinnacles with sonar and maneuvering to avoid them.

“For normal operations on the open ocean, there's nothing overhead … so for us, we have to learn how to detect and avoid ice fields that can go as deep as 200 feet in some areas,” Aljilani said.

Surfacing through an ice floe may be ICEX's most well-known event, but under-ice transits are also important.

The Bering Strait, where sea ice is typically at its greatest extent in March, is a very shallow operational area. While in it, most of the sub's control party is focused on navigating safely, Aljilani said, but north of it, inside the Arctic circle, “it actually gets very deep.”

In the strait, there is “a three-dimensional problem,” Aljilani said. “I'm worried about the ground below and the ice above, and so that skill really is about being able to avoid the ice canopy or pinnacles that are coming down.”

Open ocean allows the crew to practice more skills, such as operating deeper, coming shallow, weapons deployment, and sonar tracking — “all the skills that submarines have to have,” Aljilani said.

Climate change is making the Arctic more accessible for transit as well as resource extraction, drawing more attention from the world's navies.

But the region has long held advantages for U.S. submarines. The ice canopy can prevent detection from the air, and distances across the Arctic are shorter, allowing subs to move between the coasts quickly, aiding crisis response.

But those features cut both ways.

“The disadvantage is there's no other traffic there. So if you detect a contact under the ice, it is most certainly a submarine, and they can probably detect you as well,” Aljilani said. “It's so quiet that we could actually detect a snowmobile that was driving by, probably about 5 miles from where we were at, on top of the ice.”

Related: Russia is mopping the floor with the U.S. in the arctic, and it's downright embarrassing

Conversely, the constant grinding of ice and other background sound “raises the ambient level of noise” and affects a sub's ability to hear specific things. “In general it's hard to detect discrete sounds in that environment,” Aljilani said.

The limits the Arctic puts on movement affects everything a sub does, perhaps most importantly its ability to respond to emergencies on board.

“When we go out and operate off of Washington state or San Diego, at any time most of our casualty procedures are based on the ability to conduct an emergency blow and proceed to the surface. That is not an option when you're under the ice,” Aljilani said.

That changes the risk calculus, forcing Aljilani to rethink potential responses. During a fire aboard, the normal procedure would be respond to it and then surface to conduct emergency ventilation after the fire was out.

But in the Bering Strait, doing that “could run [the sub into] 20 or 30 feet of ice, damage my sonar, damage my sail, and really impact the ship,” Aljilani said. “So actually a safer option would almost be to accept the fact that we're flooding and maybe just settle on the bottom and then recover the ship.”

“There is no safe haven” in the Arctic, Aljilani added. “So you have to think carefully [about] how you're going to execute emergency procedures. Because if a sailor takes an action that would be normal under normal operating conditions, that actually may hazard the ship more.”