A Navy F/A-18 Super Hornet experienced an engine fire and was forced to land at Naval Air Station Oceana, Virginia, on Monday, less than two weeks after a nearly identical mishap at the same air station 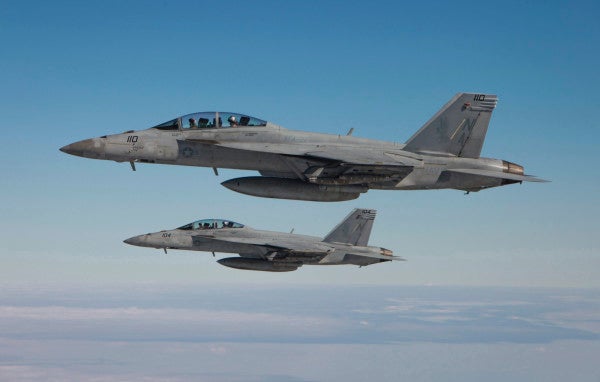 A Navy F/A-18 Super Hornet experienced an engine fire and was forced to land at Naval Air Station Oceana, Virginia, on Monday, less than two weeks after a nearly identical mishap at the same air station.

According to the Naval Safety Center, the two-seater aircraft made a safe arrested landing at the Virginia Beach air station.

“The aircraft landed safely at NAS Oceana without incident. An aviation mishap investigation has been initiated to determine the cause of the incident,” Cragg said in a statement. “There were no injuries.”

The Navy is still investigating a Sept. 10 mishap involving a different F/A-18F Super Hornet, also based at Oceana. That aircraft, attached to VFA-103, experienced an engine fire, also in the Virginia Capes region, Cragg said.

Cragg confirmed that the aircraft landed safely at Oceana in that incident as well and no injuries were sustained.

It's not clear yet whether there are any factors connecting the two recent Super Hornet mishaps.

“At this point, it is too early to speculate the causal factors for the in-flight engine fire with both VFA-103 and VFA-11, but an investigation will determine the contributing factors,” Cragg said.

She added that ongoing training has so far not been affected by the incidents.

In total, it's the third engine fire mishap involving Navy and Marine Corps aircraft this month. On Sept. 3, a CH-53E Super Stallion assigned to Marine Corps Air Station New River, North Carolina, made an emergency landing about 11 miles from the base following an in-flight fire that began shortly after the heavy-lift helicopter took off. All four Marines aboard at the time were safe and uninjured.

That incident is also under investigation.