Few things can match training on a warship for a naval battle. But the Navy believes it's created something even better on shore. 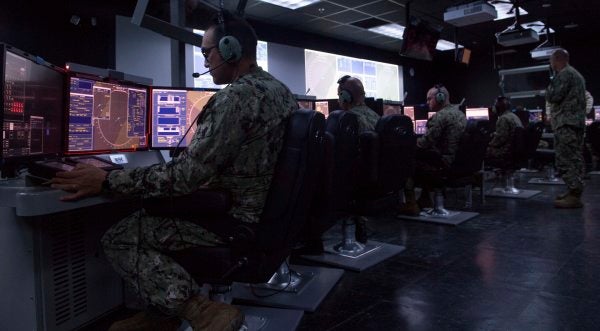 NORFOLK, Va. — Few things can match training on a warship for a naval battle.

But the Navy believes it's created something even better on shore.

A new facility on Naval Station Norfolk will start training sailors on Monday to conduct anti-submarine warfare, air defense and surface combat in a way that allows them to simulate every step required to fire weapons — which they can't do on an actual ship because of safety protocols.

The trainer at the Center for Surface Combat Systems even pipes in the same sounds sailors would hear when a missile or other weapon is fired.

“When you're training on a ship, there's safety measures that you obviously put in place because there's ordnance on board and you're integrating many different systems,” said Capt. Dave Stoner, the center's commanding officer. “Here, because it's a pure training environment, you can train to the full tactical capability of the system in a way that just can't be done on a ship.”

The new facility is only the second of its kind in the Navy. The first opened in San Diego about seven months ago. The cost for both was about $150 million, Stoner said.

The trainer is equipped with the same systems found in the combat information center aboard destroyers and cruisers. Large screens can show footage from a simulated helicopter or video that would be streamed from a ship itself, such as missiles launching. And unlike on actual ships, instructors can record, replay and stop a scenario at any time and go over what went well and what needs to be improved.

“On board a ship, you would sort of huddle up like you would after a football practice … and talk about how it went. This is now game tape,” Stoner said. “We can hear the audio of the watch standers as they go through their cadence, we can see what they saw on their screens and what the system was really doing and what the watch stander perceived it to be, have that discussion and then come right back in here and roll through it again.”

Rear Adm. Jesse Wilson, commander of Naval Surface Force Atlantic, said every ship's crew will eventually train in the new facility but that priority will go to those getting ready to deploy who need to be most proficient. He also said one of the facility's benefits is to not only train sailors on existing battle doctrine, but to try out new concepts that could be brought to the rest of the fleet.

“The Navy the nation needs requires us to be better,” Wilson said. “This facility does that.”