On June 29, U.S. Navy crews completed the first comprehensive initial operational test and evaluation of the MQ-8C Fire Scout, an... 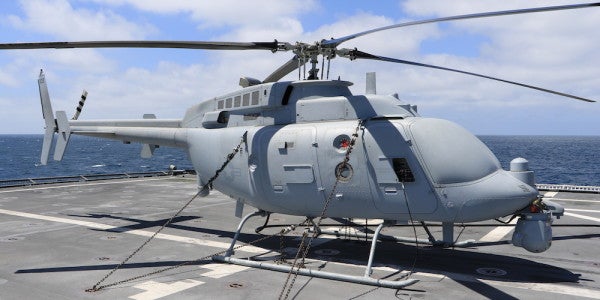 On June 29, U.S. Navy crews completed the first comprehensive initial operational test and evaluation of the MQ-8C Fire Scout, an unmanned helicopter the Navy hopes will increase the lethality of the service's new littoral combat ships.

The aircraft carried out several mission scenarios from the USS Coronado, an LCS commissioned in 2014. The Coronado's crew and members of Air Test and Evaluation Squadron 1 performed simulated engagements in order to review the MQ-8C's target-identification, intelligence-gathering, and surface-warfare abilities.

The testing showed “cohesion between the surface and aviation platforms,” the Navy said in a release published on July 9.

“The results, lessons learned, and recommendations reported on following this underway test period are absolutely invaluable to the future of the MQ-8C Fire Scout's mission effectiveness and suitability to perform that mission,” Lt. Cmdr. Seth Ervin, leader of the Air Test and Evaluation detachment on the Coronado, said in the release.

The testing also looked for ways to simultaneously operate both the Fire Scout and a MH-60S Seahawk manned helicopter onboard an LCS, finding that such operations were possible but required extensive planning and coordination.

“It has been challenging and rewarding to be one of the first maintainers afforded the opportunity to take both aircraft aboard the ship. Working together, we made the overall product more functional and efficient for the fleet,” Aviation Machinist's Mate Second Class Salvatore Greene, a member of the testing squadron, said in the release.

The Coronado previously hosted tests of the smaller MQ-8B, which has been used in Afghanistan to detect improvised explosive devices.

The larger MQ-8C, which is based on the Bell 407 manned helicopter, retains the hardware and software for the smaller model but has twice the range and can carry a payload three times bigger. The MQ-8C can also fly for 11.5 hours because the redesign for the Fire Scout program fitted the Bell 407's passenger and cargo spaces with fuel tanks, according to Jane's 360.

The MQ-8B was to be equipped with a multimode maritime radar and the Advanced Precision Kill Weapon System, consisting of modified 70 mm Hydra rockets fitted with a guidance system. The MQ-8B was limited to three tube launchers, but Capt. Jeff Dodge, the Navy's Fire Scout program manager, told USNI News the service was looking to put seven tubes on the MQ-8C.

Limited space aboard the LCS complicates decisions about arming the Fire Scout. The LCS has one magazine that would store all weapons used by aircraft and the ship's own weapon systems.

Dodge said in April that the Navy was still deciding how to fit Fire Scout armaments in with the LCS's own weapons. Those complicating factors had effectively put a hold on efforts to arm the MQ-8C until 2023, Dodge said at the time.

The MQ-8C can land and take off autonomously from any aviation-capable ship and can carry out anti-submarine, anti-surface, mine warfare, and search-and-rescue operations, according to Northrop Grumman.

Northrop has also touted the MQ-8C as a range-extender, adding up to 300 miles by providing targeting data for the LCS's over-the-horizon surface missile. The company plans to upgrade the MQ-8C with a new radar and datalink that allow it to send air-to-air and surface targeting information to surface ships.

The MQ-8C did its first ship-based flight in December 2014 on the USS Jason Dunham, an Arleigh Burke-class destroyer. It also did underway-testing aboard the littoral combat ship USS Montgomery in April 2017, when it took its first flight from an LCS.

Initial operational testing and evaluation for the MQ-8C began on April 16. Pierside testing focused on maintenance and cyber capabilities will continue on the Coronado through mid-July, the Navy said.

Initial operational capability is expected by the end of this year. The Navy hopes to have the MQ-8C aboard the LCS fleet by the early 2020s.