The Navy Third Fleet’s forward-deployed carrier armada is making its way to North Korea, where the regime of Kim Jong-un... 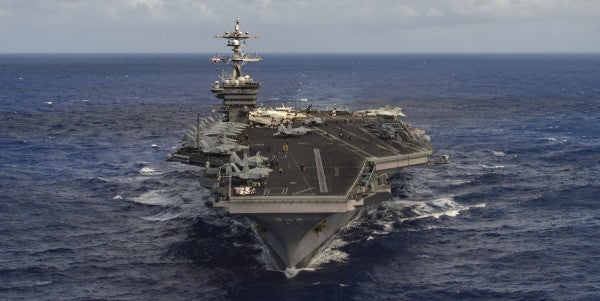 The Navy Third Fleet’s forward-deployed carrier armada is making its way to North Korea, where the regime of Kim Jong-un continues to test missiles capable of carrying nuclear weapons.

The Carl Vinson Strike Group departed Singapore and, instead of traveling to its previously intended destination of Australia, headed north on orders from Adm. Harry Harris, commander of the U.S. Pacific Command in Hawaii. His decision followed both a recent visit to Washington, D.C., and Thursday’s missile barrage on a Syrian airfield in a show of American force designed to prod Syria President Bashar Al-Assad to quit using chemical weapons on his citizens.

Dave Benham, spokesman for the command, called the strategy of diverting the supercarrier and its guided-missile escorts north a “prudent measure to maintain readiness and presence” in the volatile western Pacific.

“Third Fleet ships operate forward with a purpose: to safeguard U.S. interests in the western Pacific. The No. 1 threat in the region continues to be North Korea, due to its reckless, irresponsible and destabilizing program of missile tests and pursuit of a nuclear weapons capability,” Benham said.

It should take about a week to transit from the western Pacific to the Korean peninsula, he added.

The Nimitz-class Vinson and its carrier air wing are joined by the destroyers Wayne E. Meyer and Michael Murphy, plus the cruiser Lake Champlain. The fleet will remain under the control of Rear Adm. James Kilby — who is aboard the Vinson — and his commander, Vice Adm. Nora Tyson, who will continue to direct the force from her Point Loma Maritime Operations Center.

Deployed from San Diego to the western Pacific since Jan. 5, the strike group conducted bilateral maneuvers with the South Korean navy in March. Then after training with the Japan Maritime Self Defense Force in the Philippine Sea, the Vinson patrolled the South China Sea and then reached Singapore on April 4.

A Surface Action Group composed of the guided-missile destroyers Sterett and Dewey departed San Diego on March 31 and is nearing the coast of Hawaii, on its way to meet up with the Vinson in the western Pacific.

Before the orders from Harris to speed to North Korea, the strike group was slated to sail southeast to Australia for training with Canberra’s navy and a port call in Brisbane.

But on Wednesday morning in North Korea, the communist government fired what American analysts believe was an intermediate-range ballistic missile, the latest in a series of rocket and nuclear tests that have intensified in volume and variation since 2015.

In a terse statement following the latest test, U.S. Secretary of State Rex Tillerson said the United States “has spoken enough about North Korea. We have no further comment.”

In a bustling week at the Pentagon and White House, American officials worked up plans to batter the Syrian airfield and prepare for President Donald Trump’s meeting with Chinese leader Xi Jinping that began Thursday at Trump’s Mar-a-Lago golf resort in Florida. The talks included efforts that both Beijing and Washington could take to defuse tensions caused by Pyongyang’s missile tests and defang its nuclear program.

North Korea has been seeking to craft an intercontinental ballistic missile capable of striking the United States.

Tillerson announced on Friday that Beijing had agreed to assist the United States on the North Korean problem, but he declined to specify what form that help would take.