"Admitting that they see things in the sky and they can't identify them, that to me is the most amazing part of this." 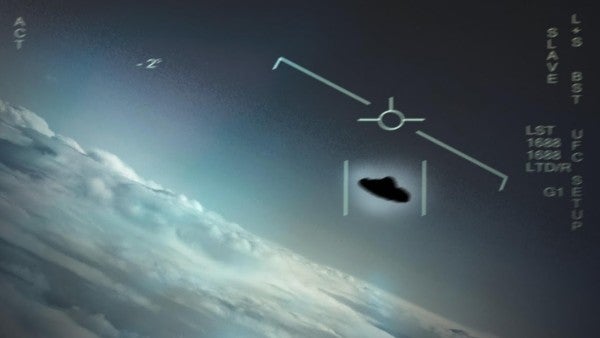 Tom Delonge has been speculating about aliens for years. According to Vulture, he quit Blink 182, the band he founded, years ago to “expose the truth about aliens,” and he founded To The Stars Academy of Arts and Sciences “to advance society's understanding of scientific phenomena and its technological implications” — or, in simpler terms, to research UFOs and extraterrestrial life.

TTSA posted three videos of supposed UFO sightings in 2017 and 2018, describing them as three US military videos of unidentified aerial phenomenon (UAP) that been through the official declassification review process of the United States government and been approved for public release.” The first video was titled “Gimbal,” the second “FLIR1” and the third “Go Fast.” According to The Black Vault, a blog which aims to “expose government secrets,” a spokesman for the United States Navy said the objects are considered “unidentified aerial phenomena” by the Navy.

The Navy doesn't want you to use the term “UFO,” though. “The 'Unidentified Aerial Phenomena' terminology is used because it provides the basic descriptor for the sightings/observations of unauthorized/unidentified aircraft/objects that have been observed entering/operating in the airspace of various military-controlled training ranges,” Joseph Gradisher, spokesperson for the Deputy Chief of Naval Operations for Information Warfare, told the Black Vault.

The founder of the Black Vault told the Washington Post it was the first time the Navy publicly acknowledged the existence of the unidentified objects and admitted that they could not identify them.

“…admitting that they see things in the sky and they can't identify them, that to me is the most amazing part of this,” Black Vault founder John Greenewald Jr. told the Post.

The Black Vault also reported that the videos weren't cleared for public release and the videos “should still be withheld,” despite TTSA's insistence to the contrary. In the post alongside the “Go Fast” footage, TTSA even notes “While TTSA was the first to obtain a copy, it should be available to any member of the press or public via the Freedom of Information Act.”