The U.S. Navy just demonstrated that two EA-18G Growlers can be autonomously controlled by a manned fighter in a first-of-its-kind test for the specialized electronic warfare aircraft 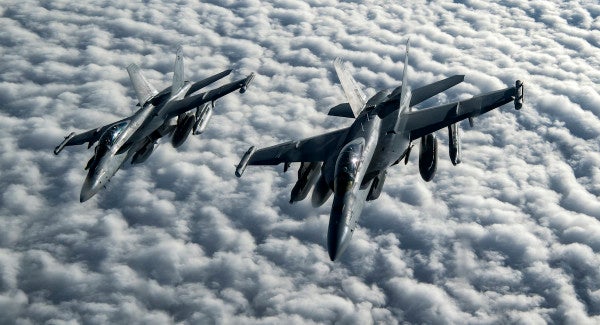 The U.S. Navy just demonstrated that two EA-18GGrowlers can be autonomously controlled by a manned fighter in a first-of-its-kind test for the specialized electronic warfare aircraft.

Boeing Co., the jet's manufacturer, announced Tuesday that the service recently flew two Growlers as drones while a third, piloted EA-18G aircraft acted as mission controller for the experiment.

There were safety pilots within the aircraft who performed the take-off and landing, although the aircraft operated as unmanned systems in flight, said Boeing spokesman Justin Gibson.

“This demonstration allows Boeing and the Navy the opportunity to analyze the data collected and decide where to make investments in future technologies,” said Tom Brandt, Boeing's Manned-Unmanned Teaming demonstration lead, in the release. “It could provide synergy with other U.S. Navy unmanned systems in development across the spectrum and in other services.”

The experiment proves the EA-18G could be used as a “force multiplier” for real-world operations, increasing situational awareness for pilots in the cockpit “without greatly increasing workload,” he explained.

“This technology allows the Navy to extend the reach of sensors while keeping manned aircraft out of harm's way,” Brandt added.

The test is part of a Pentagon effort to advance its legacy aircraft with new technologies to keep them relevant in the future battlespace. That includes manned-unmanned teaming.

Officials in recent months have been working on a relatively simple premise: connect multi-platform weapons to build a large comprehensive network based on shared data.

A recent Air Force test included a highly publicized F-22 Raptor and F-35 Joint Strike Fighter data transfer test, conducted in December off the coast of Florida. That experiment tested whether the two aircraft could communicate securely — something that is currently unworkable because of their incompatible datalink systems — by using a new radio and antenna system known as “GatewayONE.” As part of a larger event to test the service's Advanced Battle Management System (ABMS), the experiment involved Air Force fifth-generation fighters and NavyF-35Bs, as well as a Navy destroyer.

The Pentagon hopes to use the cargo plane-deployed drones to swarm enemy defenses, going ahead of fighters, ships or ground vehicles to scope out and defend against an incoming attack.