Navy urges sick sailors to stay home, off ships, but only some will be tested for COVID-19

"We don't want sick sailors on our ships right now. If sailors are feeling ill, they should notify their chain of command." 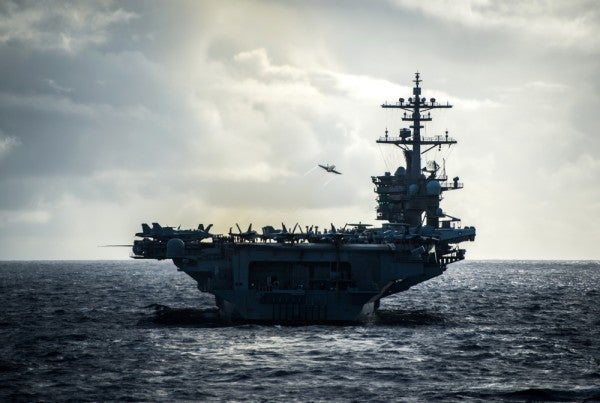 Military leaders Monday called on service members not to come to work if they're feeling sick.

During a Pentagon press briefing Monday, Jonathan Hoffman, the assistant to the secretary of defense for public affairs, said service members should stay home if they're ill. He said 18 service members so far have tested positive for coronavirus as of Monday morning.

On Sunday, the Navy announced the first presumptive positive case of COVID-19 in a shipboard sailor — one assigned to the San Diego-based amphibious assault ship Boxer.

In San Diego, Cmdr. Ron Flanders, a spokesman for Naval Air Forces, implored sailors stationed on ships not to come on board if they are ill.

“We don't want sick sailors on our ships right now,” Flanders said. “If sailors are feeling ill, they should notify their chain of command.”

As with the Diamond Princess and Grand Princess cruise ships, the close-quarters of life aboard Navy ships have been vectors for the coronavirus. San Diego government officials announced Thursday that community spread of the virus was underway.

A sailor on board the aircraft carrier Carl Vinson — which left San Diego in January 2019 for the Bremerton, Wa. shipyards for maintenance — said Thursday he and almost 600 sailors were packed tightly onto a barge as they all took versions of the Navy-wide advancement exam.

The state of Washington has had a significant number of COVID-19 cases and, like San Diego, is experiencing community spread of the virus.

“There were a lot of people coughing all over each other,” the sailor said. “Afterwards we all went back to the ship to our small compartments.”

The sailor asked the Union-Tribune not to use his name because he fears reprisal from his chain of command.

Flanders confirmed the exam took place as the sailor described.

“The E-5 exam was conducted in four different spaces (on the barge),” said Flanders. “Given the space that we have on the barge, I'm not sure we could have people sit six feet apart,” referring to the safe social distance goal some officials are recommending.

The exam is administered across the entire Navy in different locations — either on ships or shore installations — on three consecutive weeks each March and September.

Flanders, said the Carl Vinson's leadership is taking the COVID-19 outbreak “very seriously,” and that the daily ship's cleaning routine has been beefed up to respond to the virus.

“Some things that they're doing, during sweepers and cleaning stations, in addition to all the normal cleaning of the ship, the crew is using (disinfectant) wipes from ship's medical (department) to wipe down doorknobs and handrails in all the high traffic areas,” Flanders said Sunday during a phone interview.

'I don't trust the Navy's response to this'

Reached by phone Sunday, the sailor, who coughed frequently during the interview, said he suspects he has COVID-19 though a Navy doctor diagnosed him with a cold. He's worried his fellow sailors and Navy leadership aren't taking the threat seriously, he said.

“I went to the ship's medical (department) Friday and plenty of patients were showing more extreme symptoms,” the sailor, a petty officer 3rd class, said. “They told me I had the common cold and gave me some Motrin. I don't trust the Navy's response to this.”

As of Sunday, Flanders said, one sailor from the ship had been tested for the virus and tested negative.

The Union-Tribune reached out to major San Diego-based Navy commands — 3rd Fleet and Navy Region Southwest — but officials could not say whether recommended social distancing precautions were adhered to for the San Diego sailors who also took the exam Thursday.

On Thursday, thousands more sailors are set to take the Navy-wide E-4 exam.

Flanders urged sailors aboard ships — who work in a culture that often discourages people from letting illness prevent them from working — to stay home if they're sick.

“We don't want sick sailors on our ships right now,” Flanders said. “If sailors are feeling ill, they should notify their chain of command.”

The Carl Vinson sailor told the Union-Tribune Monday he's been ordered to stay home until his symptoms subside.

Military installations in San Diego, such as Marine Corps Air Station Miramar and Naval Base San Diego — each with positive COVID-19 cases — have tightened identification check procedures at their gates in an effort to minimize contact between guards and people coming onto the bases.

Late Saturday, Navy Region Southwest announced a series of moves meant to help control the spread of the virus, such as increasing cleaning in common areas and screening for air terminal passengers.

The Marines at Miramar have established an entire barracks to house Marines potentially exposed to the virus in isolation.