Morale on the USS Theodore Roosevelt is in the toilet, Navy admiral says

U.S. Navy Vice Adm. Bill Merz, the commander of the United States' largest forward­-deployed fleet, visited the aircraft carrier reeling from a coronavirus outbreak and admitted the morale for some of its crew was negatively impacted by recent events 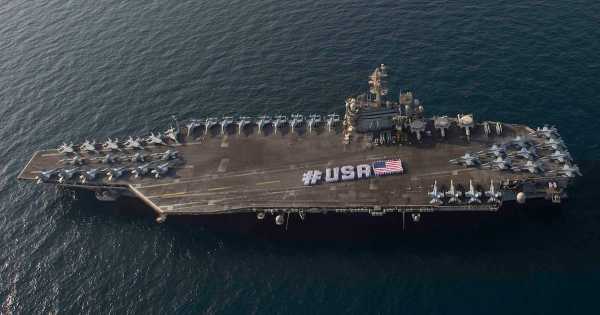 U.S. Navy Vice Adm. Bill Merz, the commander of the United States' largest forward­-deployed fleet, visited the aircraft carrier reeling from a coronavirus outbreak and admitted the morale for some of its crew was negatively impacted by recent events.

“There was lots of anxiety about the virus,” Merz told CNN. “As you can imagine the morale covers the spectrum, considering what they have been through.”

The nuclear-powered USS Theodore Roosevelt, which is currently stationed in Guam, has been beset with a range of recent problems — including the firing of its commander, Capt. Brett Crozier.

On April 2, Crozier was relieved of command by the then-acting Navy Secretary Thomas Modly after he emailed a four-page letter to over 20 people, warning about the coronavirus outbreak aboard his ship. The letter was eventually leaked to the San Francisco Chronicle, which published its contents.

It was not immediately clear how the letter was leaked, but Navy leaders said they recently completed an investigation into the matter.

Modly scrutinized Crozier's decision to email the letter to the group and accused him of circumventing the service's chain of command. In a leaked 15-minute speech directly to the crew aboard the ship, Modly went on to suggest that Crozier was either insubordinate or “too naïve or too stupid.”

Crozier, who was hailed as a benevolent commander by many aboard the ship and Democratic lawmakers, has since been diagnosed with the novel coronavirus. As Crozier left his ship, dozens of crew members, in close proximity with each other, saw him off by cheering him on.

Vice Adm. Merz, who saw the videos of the send-off, said his immediate reaction was “our job just got harder for us” because of the lack of social distancing.

Merz told CNN the ship's crew was “struggling in the wake of losing their [commanding officer] and their perception of the lack of activity regarding fighting the virus.”

Merz cited an apparent disconnect between information about the coronavirus and the USS Theodore Roosevelt.

“I certainly don't think it was malice by the ship or the leadership” Merz added. “I think it was just a matter of getting their arm around what they could and could not tell them.”

Merz, like Modly and other Pentagon leaders, said he believed Crozier's “motives were pure” when he emailed his letter and that “he was looking out for his crew.”

More than 2,300 of the carrier's roughly 4,800 crew members have been evacuated, and many of them are under quarantine in hotels in Guam. Over 445 crew members had tested positive for the coronavirus as of Friday.