Navy vet who chose to be homeless, raised awareness dies at 58

Doug Henke, whose blog documented his life as a “houseless” person in Elgin, was laid to rest Friday morning. 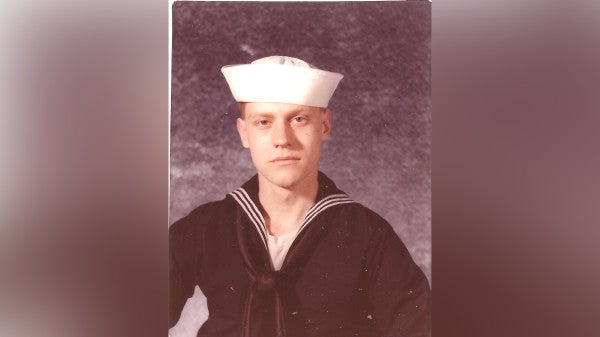 Doug Henke would have underestimated what he meant to Elgin or the local veteran community if he saw his burial service Friday, friend Greg Schiller said.

“I don’t think he had any idea how many people cared for him,” he said.

Schiller was among more than 50 friends, strangers, and veterans who paid their respects to the U.S. Navy veteran who chose to be homeless in Elgin.

“Doug Henke, we’re going to miss you, brother,” Schiller told those in attendance.

Henke, whose “Arthur: Notes from the Edge” blog documented his life as a “houseless” person in Elgin, was laid to rest Friday morning at Bluff City Cemetery in Elgin.

He died June 11 of heart disease, according to Kane County Coroner Rob Russell. He would have been 58 on June 12.

Authorities found Henke’s body near the 700 block of Big Timber Road, close to where he was dwelling in a makeshift encampment, police spokeswoman Kristie Hilton said.

The Symonds-Madison Funeral Home in Elgin covered the cost of his service as part of its Operation Love initiative, which provides burials for military veterans whose families cannot be found or are not claimed by family members or friends. Henke’s was the third service they have held in 2020.

Joy Symonds, who owns the funeral home with her husband, Dan, said they learned of Henke’s military service while doing research for his obituary.

Henke enlisted in the Navy, and served from March 3, 1982, to Aug. 19, 1983. He studied nuclear power and electronics at Naval Station Great Lakes and the Naval Nuclear Power School in Orlando, Florida.

Because he served less than two years, Henke was not eligible to be interred at a VA national cemetery, Symonds said. Contributions from local people and organizations covered the $700 grave opening and closing cost so he could be buried at Bluff City, she said.

“We really appreciate everyone in the industry and the community that pitched in,” she said.

The Rev. Tim Perry, who called the Friday service a celebration of Henke’s life, said it is the community’s obligation to watch over the homeless and those who don’t have a stable home.

“(Homelessness) can happen to just about anybody,” Perry said. “If we forget the poor and the homeless, we will have to answer for this. Be cautious when you see them on the roadway, the stores and the streets. Don’t just drive by.

“At the very least, if you didn’t want to let go of your money, give them encouragement, a story, hope to go forward,” he said.

Interviewed in January by The Courier-News, Henke said he had made a deliberate choice to live a mostly solitary lifestyle in tent dwellings in Elgin. But also saw himself as an advocate for the homeless, not only providing guidance and help to them but using his blog to show that many in the homeless community did not fit “society’s picture of homelessness,” he said.

“That’s what I’ve been doing with (the blog) this whole time is just trying to put out there that, you know, not all homeless people are dirty, poorly-educated bums that lay around drinking and getting drunk all day,” he said.

Henke earned a bachelor’s degree in business administration in 2012 and tried to live a normal life with a job and an apartment, but realized he had no desire to “fit in with the rest of society,” he said in January.

“I have all of the skills and the education necessary for just about any business position and I tried that,” he said. “I’m a square peg trying to fit into a round hole.”

Elgin police senior chaplain Al Keating said at Friday’s service that he knew Henke only through his blog and conversations he had with those who knew the stories of his “colorful and unique life.”

“He was quite a compelling man and also rather eccentric. The more I learned about him, the more I felt akin to appreciating his unique style of living,” Keating said. “In some ways, I came to see him as a modern-day Henry David Thoreau.”

Eric Henderson, of Glendale Heights, knew Henke through his work with the homeless. The two were close, he said, and he helped Henke to move his belongings from the home he called “Camelot” when he learned he had built it on Fox River Water Reclamation District land.

“We just clicked, he was a great guy,” Henderson said. “Like everyone else said, he never took donations unless he absolutely needed them or if he could share them.

“He is not forgotten in death,” Henderson added.