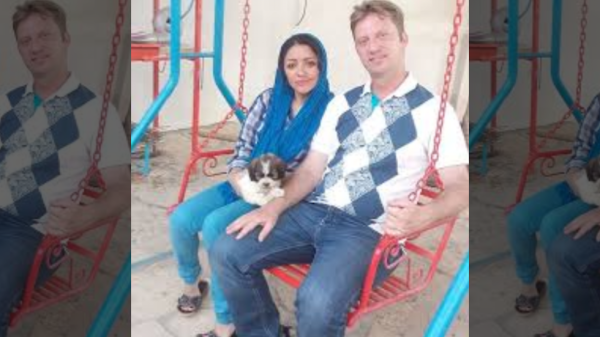 Michael White, 46, was detained in Mashhad, a religious city in eastern Iran, last July after traveling there to visit the woman. It was his third time visiting her in the Islamic Republic, said Jonathan Franks, a spokesman for his family.

White is being held in Vakilabad Prison, which is known for its executions of drug traffickers.

“The 'inappropriate' photo was of White sitting with a woman we think is his girlfriend,” said Mark Zaid, a lawyer representing White's family.

White is the first U.S. citizen arrested in Iran since President Donald Trump took office. His sentencing could worsen already rocky relations with the United States.

Franks said White's family has been told he was beaten and interrogated about his naval service after his arrest, adding that White has not been able to communicate directly with his family.

The family learned of his detention in January. Diplomats from the Swiss Embassy in Tehran visited White in February, Franks said.

The United States broke off formal diplomatic relations with Iran during the 1980 hostage crisis, and Switzerland has since represented U.S. interests in Tehran.

White served 13 years in the U.S. Navy, working in aviation maintenance administration. After retiring, he attended San Diego State, where he earned a bachelor's degree in political science.

Zaid said the State Department informed him and the family Monday that White was convicted in a trial that was held without prior notice. A local lawyer assigned to represent White in the court hearing, Zaid said, did not speak English.

White, a cancer survivor, has 22 days to appeal the court's actions, Zaid said.

White's family has become increasingly worried about his health and has been scrambling to raise money to hire a lawyer in Iran to represent him and gain more clarity about the charges of which he was convicted.

In addition to concerns that his cancer might re-emerge, White's family said that he suffers from asthma and that his immune system has been compromised by chemotherapy treatments.

White was detained in Mashhad after plainclothes police pulled over a taxi he was riding in around July 22, shortly before he was scheduled to return to the United States, his family says.

Several months went by before White's family learned of his whereabouts.

In February, the family said it was informed by Iranian authorities that White did not face espionage charges and that his arrest was linked to a “private complaint.”

But on Monday, Mashhad's prosecutor, Gholamali Sadeghi, announced that White was convicted of crimes related to national security issues.

“None of the crimes he was convicted of are related to national security issues,” Zaid said Thursday. “And White is being held separate from political prisoners.”

In recent years, hard-liners in Iran's judiciary and security apparatus have increasingly targeted Iranian dual citizens and Western nationals whom they accuse of attempting to “infiltrate” the Islamic Republic. Members of Iran's Islamic Revolutionary Guard Corps have typically used these individuals as bargaining chips for future negotiations.

As of January, White was the eighth known foreigner with U.S. citizenship or permanent residency status held in Iran, according to the New York-based nonprofit Center for Human Rights in Iran.

Although Trump had said freeing Americans held overseas “is a priority” in his administration, worsening relations with Iran make negotiating their release much more difficult.