Raul Rodriguez had worked for U.S. Customs for 18 years when internal investigators confronted him last year with a document he had never seen before: His Mexican birth certificate. 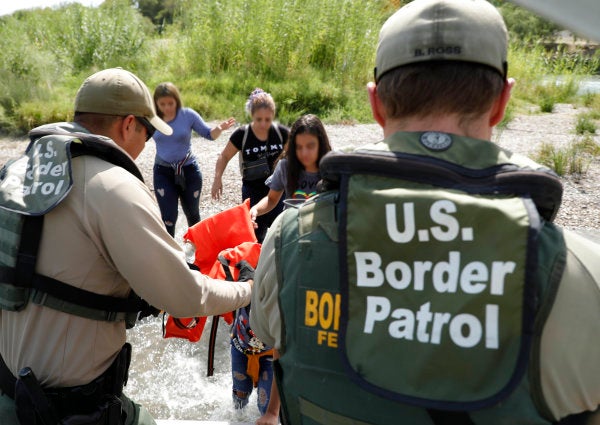 Raul Rodriguez had worked for U.S. Customs for 18 years when internal investigators confronted him last year with a document he had never seen before: His Mexican birth certificate.

Rodriguez, 51, a customs officer in Texas' Rio Grande Valley, felt the blood drain from his face. He had lived in the United States as long as he could remember and had no idea he was actually born across the border in Matamoros, Mexico.

“It was my worst fear,” he said Friday in an interview at his San Benito home.

The Navy veteran was not charged with a crime but he was fired by U.S. Customs and Border Protection in July, lost his health insurance and had his residency application rejected this month. He and his wife, Anita, 54, a Homeland Security immigration officer, hope he gets to keep his retirement benefits.

For generations, Mexicans living on the border have obtained second U.S. birth certificates for their children, often from a midwife, so the youths could attend school in the U.S. Those whose passports were later flagged would apply for citizenship or legal residency.

In recent years, that has become more difficult, even for federal employees like Rodriguez.

Texas officials have made it more difficult to obtain birth certificates and flagged hundreds as suspicious — 246 since the start of this year alone. Many were submitted by South Texas midwives. The midwife who signed Rodriguez's U.S. birth certificate was implicated in several other cases before she died in 2005, according to federal court records.

“The U.S.-Mexico border region happens to be an area of the country where there has been a significant incidence of citizenship fraud,” the State Department said Monday in a statement. “This fraud has included instances where midwives and other birth attendants, in addition to legitimately registering births in the United States, have accepted money and filed U.S. birth certificates for babies actually born in Mexico.”

Texas attorneys have filed hundreds of cases in recent years on behalf of people denied U.S. passports due to allegedly fraudulent U.S. birth certificates. Rodriguez's lawyer, Jaime Díez, has practiced in South Texas for 20 years and said passport delays and denials have become so common during the last two years, they're central to his practice.

“To me, it's an obsession by the federal government that Hispanics shouldn't be here,” Díez said recently in his Brownsville office.

U.S. Citizenship and Immigration Services noticed Rodriguez after he provided his birth certificate to help his brother in Mexico apply for a U.S. passport.

When Rodriguez was confronted by federal investigators in April 2018, he immediately offered to help them question his father, Margarito Rodriguez, a retired farmer who lives across the border from the Rio Grande Valley near Nuevo Progreso and has a visa to enter the U.S. Rodriguez, 77, met them at a Starbucks near his son's home.

When investigators asked about the Mexican birth certificate, the older man initially refused to answer, Rodriguez said. He could tell his son was upset, and hung his head.

“Just tell me the truth,” the younger Rodriguez said.

That's when his father confirmed that Rodriguez was born in Matamoros and sent to live with family in the Rio Grande Valley when he was 5.

Rodriguez left the Starbucks feeling stunned. He was met in the parking lot by his family, including his wife, who was already crying. When she told their daughter the news, the 14-year-old replied: “So Dad's an illegal?” Their 16-year-old son later posted a video on YouTube saying he was worried his dad would be deported and killed.

Rodriguez would have to apply for citizenship or legal residency. So would the eldest of his four children. Raul Jr., 29, an exterminator and father of three, was born in Matamoros and had moved to the U.S. in 1994 after he received citizenship because of his father.

The Border Patrol's internal investigation cleared Rodriguez of wrongdoing in April 2018, and the agency gave him three years to return to work, he said — if he could get U.S. citizenship. Rodriguez applied for citizenship and permanent residency through his wife.

But U.S. Citizenship and Immigration Services denied his citizenship application in June 2018, faulting him for having falsely claimed to be a U.S. citizen and having voted illegally. The agency also denied his residency application Oct. 29. His lawyer filed a motion to reopen the residency case Nov. 12, but it's unclear when he will receive a response.

Rodriguez's eldest son applied for U.S. citizenship through his wife, but has yet to receive a decision from authorities.

A USCIS spokeswoman declined to comment about the cases. A U.S. Customs and Border Protection spokesman confirmed that Rodriguez had worked for the agency, but declined further comment.

Rodriguez had joined the agency to help stop the harassment he endured as a brown-skinned boy. When he crossed the border to visit his parents while he was growing up, he said officers would inevitably take him aside for secondary screening, insist he was Mexican and threaten to send him back.

“My goal was to make a change, treat people with respect but do your job,” he said.

One of seven children, two of whom were sent to the U.S. to stay with relatives and attend school, Rodriguez graduated from high school in Mission, Texas, worked at a meat packing plant and served in the Navy as a military police officer for five years before he applied to the Border Patrol.

He met his wife, a Whittier native, at the Border Patrol academy. Her brother also joined the agency in California. They were a straight-laced Homeland Security family, avoiding gatherings where they might encounter those in the country illegally.

In 2006, Rodriguez received a national commendation for integrity for helping bust a smuggling ring, an award he still keeps on his mantel (an agency spokesman declined to comment about it). Rodriguez returned to work even after he suffered temporary paralysis in 2015 from the neck down due to a sudden case of Guillain-Barre syndrome that required a year's medical leave to recover.

After he was fired, Rodriguez lost his health insurance. He's worried about losing his Social Security and his retirement benefits. The couple has already had to refinance the three-bedroom ranch house where Rodriguez spends his days raising chickens and sheep.

In a close-knit community, the couple feel like outcasts. A representative from the union that represented Rodriguez and other customs officers told him to get a lawyer. Friends and colleagues avoid him.

The Rio Grande Valley is ringed by Border Patrol checkpoints, so Rodriguez and his son have stopped traveling outside the region, afraid they might be deported. They have appealed to lawmakers in Texas and California to intervene, but it's made no difference.

The family are most disappointed in the U.S. Customs Service, known by their uniforms as “blue shirts.”

“Anything happened, we knew we'd have the 'blue wave' to back us up,” Anita Rodriguez said. “Now when we see them, they act like they don't know us. Nothing's changed. He's still the same person. But they're treating him like a pariah.”

One exception was a customs officer who had been among those who harassed Rodriguez as a child, threatening to send him back to Mexico. She softened when they worked together. Recently, she called to offer support.

“You were right,” he told her ruefully. “You could have sent me back.”