During the height of the Vietnam War in the late ‘60s and early ‘70s, much was made of young American... 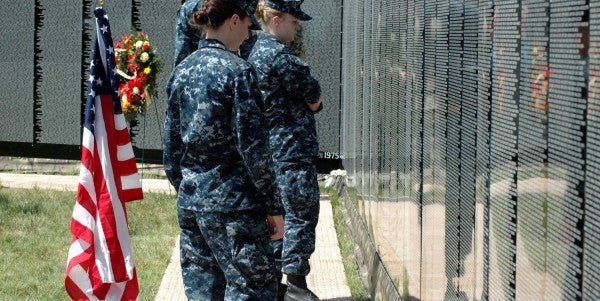 During the height of the Vietnam War in the late ‘60s and early ‘70s, much was made of young American men dodging the draft to avoid military service.

There were others, such as Paul Chen, who did everything they could to serve their country and enter the fight. Chen joined the Navy in 1974 and left active duty several years later.

Now, he oversees the Vietnam Moving Wall, which has been touring the country for 30-plus years and is calling Hermitage home through Monday morning. The wall is a half-size replica of the Vietnam Veterans Memorial in Washington, D.C. The wall visits locations where groups or organizations are willing to sponsor the moving costs and manpower.

This year alone he has visited a dozen locations.

Preferring to call himself the wall’s caretaker, he said his home is wherever the wall takes him. With a little help, Chen saw to it that the Moving Wall was properly erected Thursday on East State Street across from America’s Cemetery.

With that task underway, he talked only briefly about his service during the war. He lamented that the Navy destroyer to which he was assigned wasn’t called upon to fire its guns. “They wouldn’t let us win,’’ he said of the American government’s resolve to get out of the war.

When his military service ended, Chen looked for ways he could continue to serve his country. When the opportunity arose to work with the wall, he leapt at the chance.

Now he travels the nation’s highways in a truck that proudly boasts of what’s inside.

“I have truckers on the roads who honk their horns at me and snap a salute in support,’’ Chen said.

A couple of times when he’s pulled off the road to fix a flat tire, he’s quickly found himself surrounded by other cars and trucks.

“I’ve had six, seven and eight vehicles with people who wanted to help me,’’ Chen said. “I tell them I can handle a simple flat tire, but they still want to help.’’

He knows many of the 58,307 names on the wall by heart; eight are women who were military nurses, he said.

In a very real way, the wall is still growing. Wounds suffered by American forces during the conflict that ended in 1975 continue to claim lives. So far this year, eight more names will be added to the Moving Wall and to the memorial in Washington.

THE VIETNAM Moving Wall is open to the public round the clock through 8 a.m. Monday. Visit www.sharonherald.com for a schedule of events.