From World War II to Disney World: Navy veteran tours a hidden side of the park he helped build

"The best job I ever had," Nemeth said. 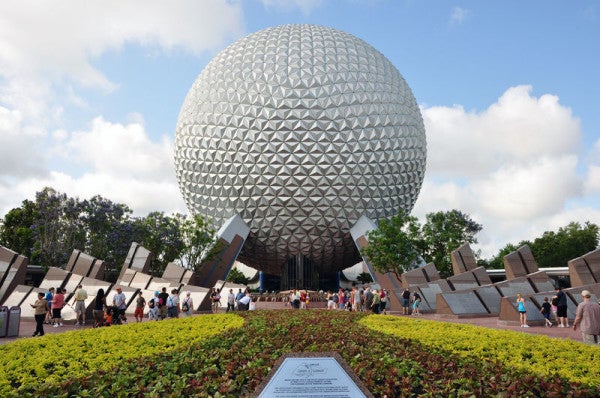 It was the kind of Disney World tour few ever get to see. The less pretty stuff. The bolts, the wires, the control panels — the underbelly of Epcot.

Ninety-four-year-old Stephen Nemeth gazed up as a flashlight shone on the pipes in the American Adventure Pavilion — pipes that he'd help install. His eyes welled up as he thought about the past.

The Kissimmee man was on a special private Disney World tour recently to go behind the scenes and see what he helped construct for the park's 1982 grand opening. The tour was Disney's goodwill gesture to Nemeth, a World War II U.S. Navy veteran, for his contributions to the history of both Disney World and America.

“We're here for you today,” Epcot engineer manager Doug DeBaere quietly told Nemeth, as he led the veteran and his two grown children around the park.

In 1982, Epcot was one of the biggest construction projects in the world. Nemeth, then 57, a plumber living in Fort Lauderdale, was one of the thousands of workers called in to help build what essentially amounted to a city.

“The best job I ever had,” Nemeth said.

Nemeth helped put in the oil lines to run the animatronics, like a rooster in The Land Pavilion. He climbed high up on Spaceship Earth, unperturbed by heights for he knew real fears, like when during the war he protected merchant ships from German submarines on the rough ocean.

His biggest problem working on Epcot's iconic globe that there was no high-up bathroom for construction workers. He hurried down the 15 floors in a hurry, Nemeth said as he laughed about the memory. After his shifts, he called his daughter, Donna Nemeth, to tell stories about his day. Disney wanted everything perfect. If it wasn't, the workers redid it, he recounted.

Sometimes, getting the park ready for its unveiling meant working days and nights. He once worked 127 hours in a single week because his replacement never showed. Nemeth didn't mind it, though. He knew he was a part of something special.

The construction workers and their families toured the park in September 1982, a few weeks before the official Oct. 1, 1982 debut. Those eight months at Epcot were good times for Nemeth, who had experienced tragedy in his life. His father died when he was 12, and by 16, Nemeth quit school to work and support his family. He joined the U.S. Navy just after his 18th birthday.

“He still talks about it today, hows much it means to him,” said his daughter, who works at Disney as a project assistant in facility asset management.

The tour stops included a small control room inside Spaceship Earth where the sounds of the Woolly Mammoth being hunted roared from the other side of the wall. It also went behind the screen of the American Adventure show where a frozen George Washington animatronic waited for his turn on the show.

Along the way, the memories ran strong for Nemeth, who turns 95 in February.

He remembered a fountain he installed that didn't exist anymore, replaced by concession seating. Gone was the Universe of Energy, which Nemeth helped build, as the space is being converted for what will be one of the world's longest indoor roller coasters. But Disney still kept some the animatronic chickens in a backstage area that reminded Nemeth of a rooster that he installed the oil lines to power.

“There it is, man!” Nemeth said. “They're pretty sharp. They look like real ones.”

After three hours later, the private tour was ending. By now, Nemeth figured he had bragging rights at the American Legion about all he had seen. Disney had given him an honorary cast badge Wednesday since he was previously employed through the Buena Vista Construction Co.

There was one final surprise. In the marina, about 20 workers gathered to unveil a final gift to Nemeth: A small maintenance boat christened in his honor, a tribute dating back to the U.S. Navy. The Epcot crew working in the lagoon would be riding on “Seamen First Class Stephen A. Nemeth, United States Navy.”

For most of the day, Nemeth had cracked jokes and teasingly quizzed how much things cost during the tour. Now, he was speechless as he was helped onboard the boat with his name.