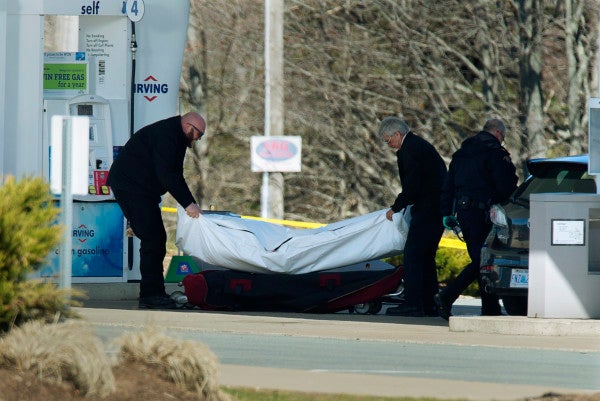 A former Albuquerque couple appears to be among the victims of a mass shooting in a rural Nova Scotia community that has left at least 22 dead.

The home belonging to John Zahl and his wife, Joanne Thomas, was found burned following a rampage over the weekend in the town of Portapique, according to The Associated Press. Officials said the suspect, identified as 51-year-old Gabriel Wortman, was shot and later died on Sunday. It was Canada’s worst mass shooting, and authorities are still searching for a motive.

Zahl retired from FedEx, and Thomas was a former University of New Mexico employee.

Gov. Michelle Lujan Grisham noted the deaths in a Twitter post. She said her prayers go out to the couple’s family and loved ones.

Zahl’s daughter, Jennifer Zahl Bruland, told the Journal that Canadian authorities have not yet identified her father and stepmother as victims in the rampage, but she was expecting them to do so Wednesday.

“We’re just starting to process this,” she said. “The Royal Canadian Mounted Police has been very good to us. They’ve been staying in touch and keeping us informed.”

Justin Zahl, the couple’s grandson, frantically called police after he saw that his grandparents’ two-story log cabin had been set on fire, with their two cars in the driveway, according to AP. The news organization reported that Zahl had been told his grandparents’ bodies were likely in the ruins.

Bruland said her father and stepmother had lived in Albuquerque for 30 years and moved to Nova Scotia in 2017.

“They were very dear people and very involved in Albuquerque,” Gene Valdes, a friend of the couple, told the Journal. He said the couple visited him and his wife, Dorian Dodson, in Tucson in February and kept in constant contact.

“We were best friends for 50 years,” Valdes said. He said he knew something was wrong when the couple’s grandson, Justin, called Valdes and his wife after the rampage asking them if they heard from his grandparents.

“He called us at 4 a.m. Sunday and off and on after that,” Valdes said.

Valdes said Zahl, 69, and Thomas, 58, should have been on a cruise at the time of the shooting, but the COVID-19 pandemic forced a change in plans.

He said the two had fallen in love with Nova Scotia, calling it “idyllic,” despite the harsh winters.

“But they were talking about selling their house and moving back to the U.S.,” he said.

Valdes and Zahl served in the U.S. Navy together. They were Russian translators.

He said Zahl and Thomas married in 1985 and settled in Albuquerque, where Zahl worked for FedEx and later worked part time for Albuquerque Public Schools. He also coached soccer.

Thomas, a Canadian citizen, worked at Eye Associates, the University of New Mexico and Health Care Service Corp. before she retired.

“They were very active in a local Presbyterian church where John was an elder,” Valdes said. Even though they joined a church in Nova Scotia, he said they still watched a livestream of church services in Albuquerque.

“I was talking to them on Easter,” his daughter said. “They were watching the livestream then, and had to get off the phone. They had a Zoom meeting with some of their friends.”

She called her father and stepmother “genuine people.”

“If they asked you how you were, they meant it,” Bruland said. “They cared about their friends in New Mexico.”

She said the family hopes people will remember them for “their kindness, laughter and joy,” instead of the tragedy.

She said her father had four children, another daughter, Sarah Zahl, and sons Andrew and Daniel. The couple raised two grandsons, Riley, who lives in Albuquerque, and Justin, who lives in Nova Scotia.