Navy Veteran Seeks To Reclaim Pullup Record With 8,000 In A Day 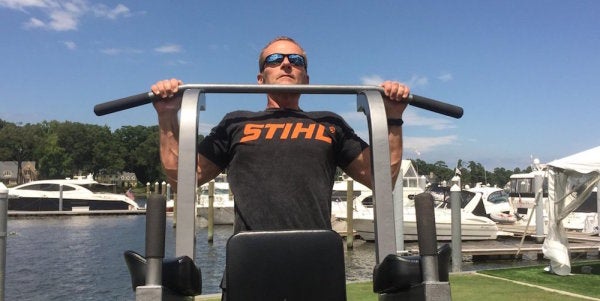 Rodney Hahn wants his title back.

In 2015, the Virginia Beach trainer and Navy veteran smashed two Guinness World Records for pullups – hammering out 6,737 in 24 hours – on a dockside patio at the Cavalier Golf & Yacht Club.

But a Northern Virginia teenager has since taken the title, completing more than 7,300 pullups last year. So Hahn, now 56, has a new goal: an eye-popping 8,000 pullups in a day.

“It’s not my first rodeo,” he said. “I know how to train. I know what to expect. The hardest part is the sleep deprivation, and there’s no training for that.”

Hahn works out six days a week, building his endurance in small but “ferocious” increments – never more than 45 minutes at a time. Sundays are technically his rest day, he said, although he usually spends them riding bikes or swimming with his 11-year-old daughter .

Hahn is in his 20th year as a physical trainer and fitness director at the Cavalier Golf & Yacht Club. Clients know what he’s chasing. Some even seek him out because of it, he said. He’s almost lost others because of the intensity of his workouts – but they usually come back with a little encouragement, he said.

“I’ve learned that you can do what you put your mind to,” he said. “I’ve always believed that I could do it. It’s just a matter of incrementally moving toward it.”

Hahn says he has managed to stay relatively healthy over the years, with the exception of a few sore joints here and there. Nothing he can’t work through, he said.