Why are the TV news people in regular clothes, and why are they broadcasting from their homes? 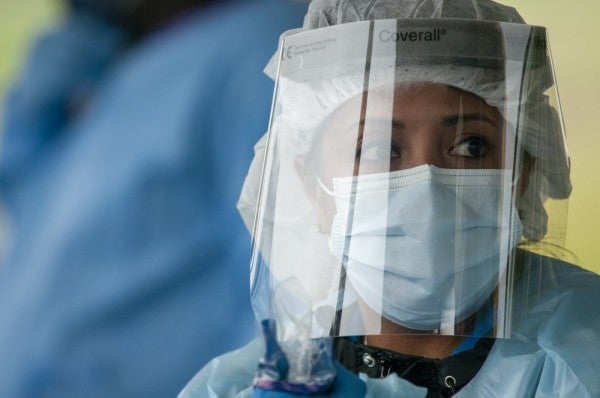 Retired Navy pilot Ricardo Vizcarrondo was groggy when he came out of a three-week medically induced coma. And when a nurse turned on the TV in his room, he became even more puzzled.

Why are those people each in their own little squares on the screen? Why are the TV news people in regular clothes, and why are they broadcasting from their homes?

It was May, he was told. How can this be? I missed Easter with my kids. What happened here?

The whole word had changed while he was in his coma, connected to a ventilator that breathed for him when he couldn't do it himself.

Tuesday morning, some seven and a half weeks later, he was able to walk out on his own, using a crutch, bound for home and family in Fleming Island. He had spent six weeks in the intensive care unit and then 11 days in rehab.

“This has been my home basically for 55 days, but it's not too bad,” he said Tuesday. “I made so many friends here, people I can call family, who never let me go. They took me under their wings.”

By late morning, his extended family, including his father and stepmother, had gathered under a covered entrance area of a rehab center on the Orange Park hospital campus. All wearing masks, they enveloped him in an teary-eyed group hug.

Then his oldest son, Fabian, 15, pulled the family car up to the entrance. He would not, however, be driving all the way home. He chuckled: His dad had been under enough stress already.

Vizcarrondo was born in Spain and grew up in Puerto Rico. He was a Navy pilot and instructor for 20 years, and now works for a charter plane company. He'd like to get back to work when he can.

He can't pinpoint when he could have contracted the virus. In March, he had taken a plane to the Bahamas and to Miami. Maybe he picked it up there, he said.

Vizcarrondo said he had no underlying health conditions that could have contributed to how he reacted. He'd never even been hospitalized.

The virus left him not able to walk, with trouble speaking. It attacked his organs, including his heart and kidneys. He received several dialysis treatments. He lost 35 pounds.

Vizcarrondo said he's a private person. But he wanted to speak publicly about his ordeal so it might help others.

Payam Nabizadeh is a pulmonary and critical care physician who treated Vizcarrondo and other COVID-19 patients.

“I've trained and worked at five level-one trauma centers and seen all kinds of illnesses, of so many kinds of severity,” he said. “He was a very, very sick individual.”

Nabizadeh said there was one point, after Vizcarrondo got off the ventilator, that he worried his patient would die. “He was just so ill for so long. It's very difficult to see your patient go through that.”

'I don't care how strong you are, you lose it.'

On Monday, he got emotional talking about it. “I wasn't sure if I was going to be able to provide everything he needed to see his boys again,” he said.

Vizcarrondo's wife, Ana, and their three sons remained healthy throughout his ordeal. They could visit him at the hospital, though Ana was only able to see him in person when he was in rehab. She couldn't touch him, though.

Their boys — Fabian, 13-year-old Daniel and 10-year-old Adrian — had to remain outside in a hallway, looking at him through a window.

“When they put their heads against the window and say, 'Daddy, I love you,' you lose it,” Vizcarrondo said. “I don't care how strong you are, you lose it.”

His wife said her sons and her family helped her get through the long weeks, as did people from around the world who sent her best wishes on social media and said they were praying for him.

“The worst thing was not able to see him, to hold his hand, to talk to him,” she said. “The boys, they always took care of me, because I didn't have any strength. They were amazing. We were crying, praying every 10 minutes. He's here, we're so glad. I always knew he was coming home.”

She did think, only briefly, that he might die.

“Maybe for six minutes, I thought about it, what if?” she said. “But six minutes in 55 days? That's nothing.”

“I always saw him sitting down on the couch, looking at me,” she said. “That's what I was always thinking about — having him by my side, making jokes, having fun, watching movies with the boys. I cannot explain to you how happy and blessed I feel today.”