The police officer killed during a traffic stop in Newport News on Thursday night was a well-liked young officer who just graduated from the police academy seven months ago, Police Chief Steve Drew said at a somber news conference Friday 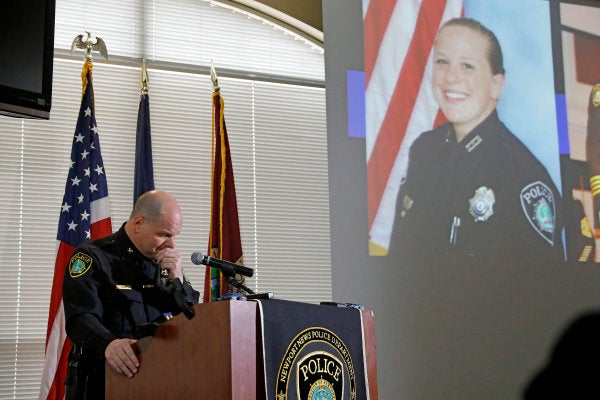 Katherine M. “Katie” Thyne, 24, a mother of a 2-year-old daughter, is a former Navy sailor who began with the department as a recruit in November 2018, graduated from the academy in June, and was recently assigned to the South Precinct as a patrol officer.

Thyne's death Thursday evening during a drug investigation on 16th Street — during which she was dragged about a block and pinned between the fleeing car and a tree — is the Newport News Police Department's first line-of-duty death in more than 25 years, with two officers having been lost in 1994.

The man who fled Thursday's traffic stop, identified as Vernon Evander Green II, 38, of Newport News, is charged with felony homicide, a form of second-degree murder for accidental killings that occur during the commission of other another felony. He was also charged with marijuana possession and felony eluding.

But Drew said more charges are likely, with Commonwealth's Attorney Howard Gwynn to be involved in those decisions after the investigation.

Thyne, a New Hampshire native, made Newport News her home after the Navy and was still in the Navy Reserves, Drew said. She was a coach of a girls three-on-three basketball team for the department's “Chief's Challenge” league at the Boys and Girls Club.

“This is what she wanted to do,” said Drew, who fought back tears several times during the news conference. “She wanted to be in law enforcement, and wanted to do it in this city. … And she was very active in the community.”

Her smile, the chief said, was infectious, causing others around her to smile, too. The basketball games are scheduled for Saturday, he said. “We asked, 'Should we cancel them?' The answer is no.”

Thyne's toddler daughter, who Drew said “looks just like” her mother, recently celebrated her second birthday. Thyne also leaves behind a long-term partner, he said, as well as her mother, stepfather and brother.

According to a criminal complaint filed in Newport News General District Court, Thursday's incident began at 6:37 p.m. when another police officer who was working the city's closed-circuit TV system saw a silver car parked in a parking lot at the Monitor-Merrimac Overlook Park, with the occupants smoking pot inside.

Thyne and Officer Nicholas Meier were dispatched to the scene. The park, which overlooks the Hampton Roads harbor, is on 16th Street, across from Peterson Yacht Basin, north of Stuart Gardens.

Meier parked at the Yacht Basin, and walked across the street to the parking lot. On his approach, he said, he smelled marijuana coming from the silver car.

He told the female passenger, later identified as Ivy T. Runnels, 38, of Hampton, to get out of the car, and she obeyed and stood off to the side, the complaint said.

Meiser then went over to the driver's side, where Thyne was talking with Green. “Officer Meier and Officer Thyne gave Mr. Green several commands to exit the vehicle, and he did not comply,” said the affidavit from Detective J.D. Rock.

Meier called a “10-3” to clear a radio channel, the complaint said, and Green started the vehicle and took off.

While Meier was able to step out of the car, Thyne — standing near the open door — became “trapped between the driver's door and frame of the vehicle” as it fled from the parking lot, the complaint said.

The car jumped a curb near a tree less than a block away, crashing into a small brick embankment in front of a home.

Meier ran toward the site and saw Thyne down on the roadway, near the tree. He radioed “officer down,” the affidavit said, and began administering first aid.

Thyne was airlifted to Norfolk Senrata General Hospital, where she was pronounced dead at 7:40, “due to the injuries received from being dragged by the vehicle.”

Green, who ran from the crashed car, was quickly arrested.

Officers had already been en route to the scene because of the drug arrest, and a “Be on the lookout” was radioed out after the crash. Another responding officer saw a man that matched that description, detained him.

“Did you come from that vehicle?” the officer asked.

Green declined to speak with detectives, and is being held without bond at the Newport News City Jail. He was arraigned by video conference Friday morning in General District Court, with Judge Matthew W. Hoffman appointing him a public defender and setting a May 13 court date.

Green had prior charges pertaining to drugs, firearms and stolen goods. He did not have any pending Virginia charges against him before Thursday's incident, though court documents said he was still on probation from prior charges — meaning he could have gotten past jail time imposed if he got new convictions.

Runnels, the car's passenger, was charged with marijuana possession. She told officers that Green, whom she knew as “V” or “Veto,” picked her up at her home and drove to the parking lot, where he began smoking. She said she heard officers telling him to get of the car, but didn't hear his reply before he took off.

At Friday's news conference, Mayor McKinley Price began by calling a shooting of an officer “one of the things you fear” as mayor.

“My first response is condolences to the family and secondly to the police force, which is our second family,” Price said. “We all are very sad this morning. … It's ironic. When I got the news. I was at a conference meeting us Conference of Mayors in D.C. This is probably one of the things that mayors fear is having to address something like this.”

“The community wants you to know that we have your support your back, and anything we can do as council members, and as city, please call upon us,” he said.