The Navy Wants DoD To Bring Back Extended Deployment Pay

The Navy wants the Defense Department to reauthorize a program that pays sailors extra when their deployments exceed 220 days,... 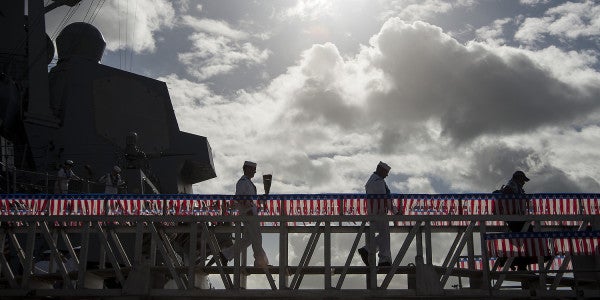 The Navy wants the Defense Department to reauthorize a program that pays sailors extra when their deployments exceed 220 days, which became commonplace in the wake of the Sept. 11 terrorist attacks.

The two-year program is set to expire Sept. 17, but the Navy is working to extend the program so sailors will continue to receive bonuses in their paychecks, according to Lt. Cmdr. Nate Christensen, spokesman for the chief of naval personnel.

Sailors receive a prorated bonus of $495 a month for an extended deployment, which equals $16.50 a day for each one beyond 220 days.

Six months was once the standard length of time Navy ships were out to sea. But in recent years, many ships' deployments lasted nine to 10 months. Extended deployments became so routine following 9/11 that the military stopped paying troops extra. The Navy now wants a standard deployment to last seven months, with ships deploying every three years.

The USS Harry S. Truman was supposed to be the first aircraft carrier to have a seven-month deployment under that new system. But an additional 30 days were tacked on to give the USS Dwight D. Eisenhower time to replace it in the Middle East while the Truman's aircraft continued to patrol the skies over Iraq and Syria as part of Operation Inherent Resolve.

Petty Officer 1st Class Dustin Boudreau, an aviation ordnanceman aboard the Truman, said aboard the ship in June that the extra pay made the news of an extended deployment a little bit easier to handle.

“You get more money,” he said. “It makes it easier to have to swallow.”

Since the program was implemented on Sept. 17, 2014, the Navy has doled out more than $15.3 million in bonus pay for extended deployments across the fleet.

“These incentives reward those who take the hard and challenging billets at sea, which form the backbone of our operations,” Navy Secretary Ray Mabus said in a congressional subcommittee meeting in March.

The extended deployment pay was in a package of proposals Mabus ushered through in 2014 as part of a plan to fill thousands of open sea jobs, including approving a 25 percent increase in another incentive known as sea pay for sailors assigned to ships.

“The Navy is in high demand and is present where and when it matters. Hardship Duty Pay – Tempo is designed to compensate Sailors for the important roles they continue to play in keeping our nation safe during extended deployments (beyond 220 consecutive days) around the globe,” Lt. Cmdr. Nate Christensen, a spokesman for Navy Personnel Command, said in an email.

Ships assigned to the Truman strike group include the cruiser USS Anzio and the destroyers USS Bulkeley, USS Gonzalez and USS Gravely. The guided-missile destroyer USS Ramage left Norfolk with the strike group in November, but hasn't returned yet. It was on a planned independent ballistic missile defense deployment.