Two U.S. Navy warships have sailed through the Taiwan Strait, Taiwan's Ministry of National Defense said in a statement Monday. The Arleigh... 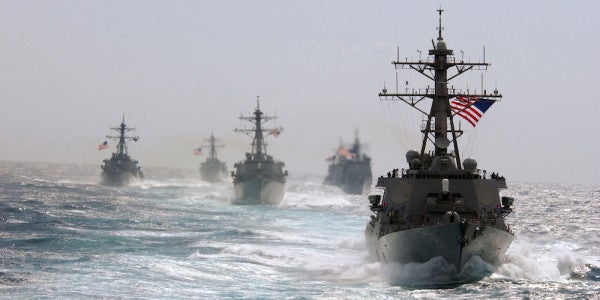 Two U.S. Navy warships have sailed through the Taiwan Strait, Taiwan's Ministry of National Defense said in a statement Monday.

The pair of U.S. Navy warships conducted “a routine Taiwan Strait transit in accordance with international law,” Pacific Fleet spokesperson Lt. j.g. Rachel McMarr told BI, adding that the purpose of the mission was to demonstrate “the U.S. commitment to a free and open Indo-Pacific” and to remind others that “the U.S. Navy will continue to fly, sail, and operate anywhere international law allows.”

The latest move comes at a time of heightened tensions between Washington and Beijing, which have been fighting over a variety of issues ranging from trade to territorial disputes.

China, concerned that U.S. military actions around Taiwan will embolden pro-independence factions on the self-ruled island, has bolstered its military presence in the area this past year. The Chinese military has sailed its aircraft carrier and accompanying escort ships through the Taiwan Strait and conducted “encirclement” exercises involving fighters, bombers, and other military assets throughout the year.

Beijing perceives Taiwan as a breakaway province and has threatened to take military action if Taiwan attempts to declare independence.

The U.S. Navy's latest challenge to China comes just a few weeks after a showdown in the South China Sea, in which a Chinese destroyer nearly collided with a U.S. Navy warship during an “unsafe” encounter following a routine freedom-of-navigation operation near the contested Spratly Islands. That incident followed a string of U.S. Air Force bomber flights through the disputed East and South China Seas, flights Beijing characterized as “provocative.”

Chinese warships shadowed the U.S. Navy ships through the Taiwan Strait Monday, but the Chinese ships remained at a safe distance.