The control room of the Navy's most advanced submarine is filled with sophisticated computers, flat-screen monitors and sailors who grew up... 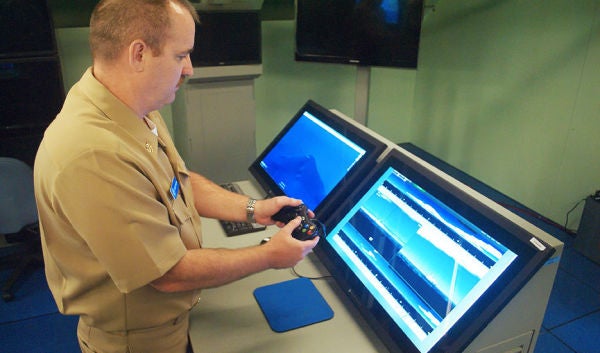 The control room of the Navy's most advanced submarine is filled with sophisticated computers, flat-screen monitors and sailors who grew up in a digital world.

At times it can look a bit like a video game arcade, and not just because of the high-resolution graphics.

The Navy is beginning to use an Xbox 360 controller – like the ones you find at the mall – to operate the periscopes aboard Virginia-class submarines.

Unlike other types of submarines people are familiar with from Hollywood, Virginia-class submarines don't have a traditional rotating tube periscope that only one person can look through at a time.

It's been replaced with two photonics masts that rotate 360 degrees. They feature high-resolution cameras whose images are displayed on large monitors that everyone in the control room can see. There's no barrel to peer through anymore; everything is controlled with a helicopter-style stick. But that stick isn't so popular.

“The Navy got together and they asked a bunch of J.O.s and junior guys, 'What can we do to make your life better?' ” said Lt. j.g. Kyle Leonard, the USS John Warner's assistant weapons officer, referring to junior officers and sailors. “And one of the things that came out is the controls for the scope. It’s kind of clunky in your hand; it’s real heavy.”

Lockheed Martin and Navy officials have been working to use commercial off-the-shelf technology to reduce costs and take advantage of the technological skills sailors grow up with. The integration of the video-game Xbox controller grew out of that effort.

Lockheed Martin refers to the classified research lab in Manassas where testing occurred as the submarine version of “Area 51,” the nickname for the Nevada base where some of the Air Force's most advanced and secretive projects are tested.

The Xbox controller is no different than the ones a lot of crew members grew up playing with. Lockheed Martin says the sailors who tested the controller at its lab were intuitively able to figure out how to use it on their own within minutes, compared to hours of training required for the joystick.

The Xbox controller also is significantly cheaper. The company says the photonic mast handgrip and imaging control panel that cost about $38,000 can now be replaced with an Xbox controller that typically costs less than $30.

“That joystick is by no means cheap, and it is only designed to fit on a Virginia-class submarine,” said Senior Chief Mark Eichenlaub, the John Warner's assistant navigator. “I can go to any video game store and procure an Xbox controller anywhere in the world, so it makes a very easy replacement.”