The Maine-built USS Zumwalt, the first-in-class “stealth” destroyer that left the Bath shipyard on Sept. 7, broke down Monday night... 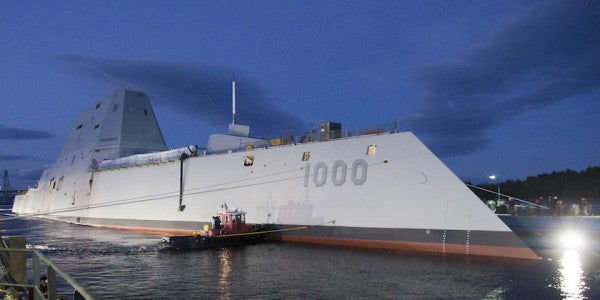 The Maine-built USS Zumwalt, the first-in-class “stealth” destroyer that left the Bath shipyard on Sept. 7, broke down Monday night while passing through the Panama Canal and was towed by tugs through the locks toward the Pacific Ocean.

The DDG 1000, the first of a class of three destroyers that cost an estimated $22 billion combined, “suffered an engineering casualty,” the Navy Times reported. The Zumwalt was towed through the locks to Rodman, a former U.S. military base.

The ship lost propulsion in its port shaft and salt water leaked into the Zumwalt’s two electrical motors that are driven by its gas turbines and in turn electrically power the ship’s systems, a defense official told USNI News on Tuesday.

The ship sustained minor cosmetic damage when it made contact with the lock walls, according to USNI News.

Related: Zumwalt Captain: She’s ‘Like A Very Souped Up SUV’ »

In September, the Zumwalt stayed in Norfolk, Virginia for two extra weeks while a seawater leak in the propulsion motor drive oil auxiliary system for one of the ship’s shafts was repaired, Navaltoday.com reported.

Further leaks and engineering issues were encountered in Florida in October.