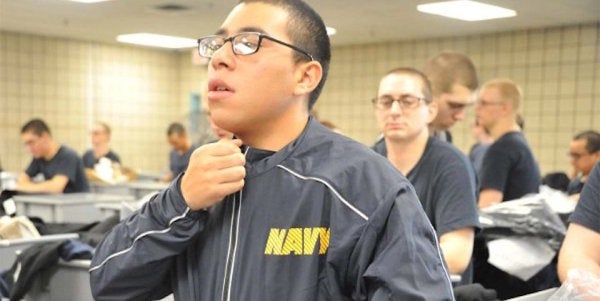 The service announced Thursday that recruits at the Navy's only boot camp in Great Lakes, Illinois, began receiving the navy-blue, moisture-wicking ensemble in April. Other eligible enlisted sailors began to receive an increase in their sea bag allowance at the same time to cover the cost of the gear items, about $100.

The suit consists of a jacket and pants, both made of water-repellent nylon, with a mesh fabric lining. The items are unisex and feature a few distinctive details, including silver reflective piping and gold “Navy” logos applied via heat transfer.

The jacket will have elastic at the wrist, side pockets and a hidden chest pocket, and a drawcord adjustable waist, according to an administrative message. The Navy logo will appear on both the chest and back, though it will not be reflective, as some services' uniforms are.

The pants will have silver trim down the sides, side pockets, and side zippers at the bottom leg openings.

The appearance, including the material used and the placement of the logo at the back, is very similar to the olive green warm up suit in use by the Marine Corps and the navy tracksuit midshipmen wear at the U.S. Naval Academy.

While sailors were initially supposed to be issued the fitness suit in 2016, there were “unforeseen technical difficulties” with production that delayed the rollout by roughly half a year, according to the message.

The Navy's traditional PT outfit includes a gold “Navy” T-shirt and blue mesh shorts. Those aren't going away; the new items are just designed to offer a warmer alternative for exercise.

The fitness suit will be a seabag requirement for all officers and enlisted personnel, with a mandatory possession deadline of Sept. 30, 2021, according to the Navadmin. While recruits are already getting the suit, it will not be available for purchase in the fleet until July, when it will be made available in select fleet concentration areas. By October, all Navy uniform centers and exchanges will carry the suit items, according to the message.

Designed to be worn for group and unit PT and during the semi-annual physical readiness test, the suit will facilitate running and exercises done upright and on non-abrasive surfaces, the message notes. Sailors can also wear the suit on and off-base for individual PT, but are not required to do so. While at sea, commanding officers will dictate how and when the uniform is worn.

While wearing the uniform, sailors can wear a blue Navy or command ball cap or a watch cap if they choose. Thermal undergarments can also be worn, according to the message.

The Navy is now also selling the soon-to-be-required white choker-style dress coat for officers and chief petty officers, ahead of the mandatory wear date of Jan. 31, 2020. The coat went on sale at Navy exchanges in January. The coat is tailored and features a single-breasted design with princess seams, but is otherwise nearly identical in detail to the existing men's coat.

It was approved in 2015 as part of a rash of Navy uniform changes designed to make uniforms more gender neutral. The changes came at the initiative of then-Navy Secretary Ray Mabus, who said the move would promote gender equality within the service.