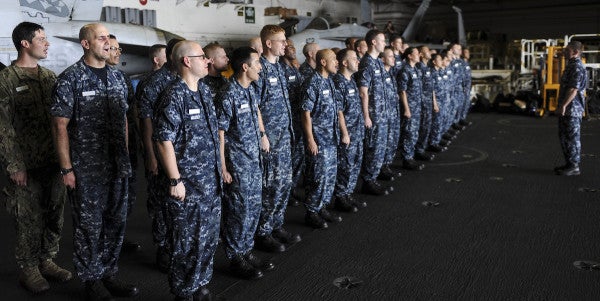 The Navy is getting rid of its controversial “blueberries” uniform–but the move comes with a price tag.

Navy plans call for making the blue-and-grey NWU Type I optional for sailors beginning October 1 and eliminating its use entirely by the fall of 2019. New recruits will be issued the green camouflage uniform beginning Oct. 1, 2017.

The cost of transition revealed by the Navy means the short-lived blue camouflage will cost almost as much to kill as it did to create. Introduced in 2009, the uniform cost $229 million to develop, Navy Times reported.

But the uniform came under fire for its pointless camouflage pattern — which only worked if sailors fell overboard, critics said — and for its nylon material, which was found to melt when exposed to fire and posed a potential hazard to the sailors who wore it.

The high cost of developing the many camouflage patterns has drawn censure from lawmakers and watchdogs. This year the Senate included a provision in the National Defense Authorization Act that would prevent the Defense Department from developing any new camo without notifying Congress a year in advance.