There are Nazi troops buried in US national cemeteries with headstones adorned with swastikas, and Veterans Affairs is taking heat for preserving the grave markers 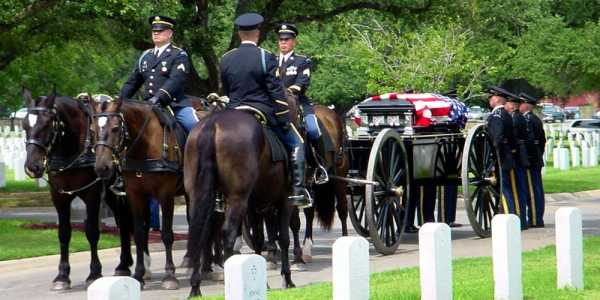 There are Nazi troops buried in U.S. national cemeteries with headstones adorned with swastikas, and Veterans Affairs is taking heat for preserving the grave markers.

At Fort Sam Houston National Cemetery in Texas and Fort Douglas Post Cemetery in Utah, there are three headstones featuring a swastika in the center of iron cross.

The markers also display the German inscription: “He died far from his home for the Führer, people and fatherland.”

Dozens of enemy troops are buried in the two national cemeteries, but the headstones for three enemy dead were different from the others, which only feature names and dates, according to Military Times.

Concerned by the “shocking and inexcusable existence of these Nazi-adorned grave sites in VA National Cemeteries,” the Military Religious Freedom Foundation demanded the VA secretary issue “an immediate and heartfelt apology to all United States veterans and their families.”

The watchdog organization said in an emailed statement that the VA should explain why the Nazi troops were buried there in the first place and take steps to “immediately” replace all of the offending headstones.

In response to questions about the graves, the VA said that the headstones date back to the 1940s, before the cemeteries were placed under VA authority. Veterans Affairs further explained that the markers are protected by the National Historic Preservation Act of 1966.

“For this reason, VA will continue to preserve these headstones, like every past administration has,” a VA official told Salon, which first reported the story.

The Military Religious Freedom Foundation responded by condemning “in the strongest possible manner the VA's incredibly cowardly” response, writing that “the VA's pathetic and feckless response here is disingenuous at best and dishonest at worst.”

A retired U.S. veteran who visited the Fort Sam Houston cemetery recently told Military Times that he was shocked when he discovered the grave markers. “This is the hallowed ground of people who gave their life for this country,” he said. “To be buried next to people they fought displaying that symbol of hate is disgusting.”

Michael Weinstein, the chair of the Military Religious Freedom Foundation who wrote the statements taking issue with the headstones, said that the VA's stance on this matter “only adds more despicable fuel to the spreading conflagration of anti-Jewish bigotry and prejudice.”

Weinstein told Insider in a statement that the foundation is discussing possible legal action against the VA.