The other threatening messages date back to May 2018, when four were received over 10 days in restrooms and a portable bathroom 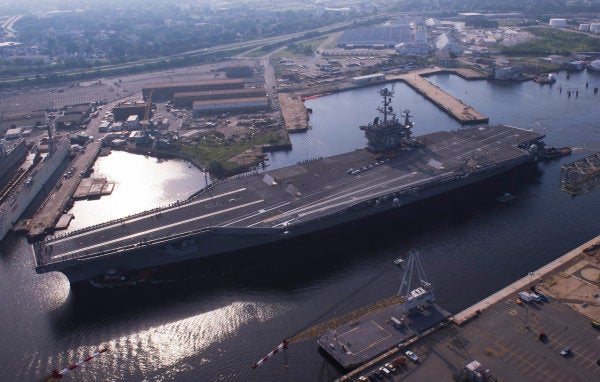 PORTSMOUTH — The Naval Criminal Investigative Service is offering a $2,500 reward for information leading to the prosecution of whoever left bomb threats in restrooms at Norfolk Naval Shipyard.

The most recent message was found on Feb. 14. That same day, there were unrelated reports of an active shooter at the shipyard, which turned out to be a false alarm.

Norfolk Naval Shipyard is a sprawling industrial complex on the Elizabeth River that employs more than 10,000 civilians and hundreds of military personnel. It's the Navy's oldest public shipyard and its main campus is spread over 585 acres and includes 201 buildings.

The other threatening messages date back to May 2018, when four were received over 10 days in restrooms and a portable bathroom.

“NCIS takes all threats to the public safety of our Navy community seriously,” Norfolk Field Office Special Agent in Charge Cliff Everton said in a statement. “We know from experience that the public is our partner in helping safeguard our military bases and personnel, and we thank them for their continued assistance.”

NCIS posted the reward offer with a flier on Facebook Thursday. The flier featured images of threatening messages, but NCIS said later that those images were not from the shipyard.

NCIS spokesman Jeff Houston said images of the actual messages left at the shipyard would be posted sometime next week.

Anyone with information is asked to call NCIS at 757-444-7327 or submit a tip online at www.ncis.navy.mil/Pages/NCISTips.aspx. NCIS also has a downloadable app called NCIS Tips.

Last March, Petty Officer 3rd Class Allante Martanaze Arrington pleaded guilty and was sentenced to 15 months in prison for making a series of bomb threats in August 2017 to Joint Expeditionary Base Little Creek in Virginia Beach and Naval Station Norfolk.

The threats resulted in lock-downs and evacuations that affected ships and pier operations.

WATCH NEXT: EOD Bomb Bots Have Come a Long Way