Marine Vet Running For Office Was Listed As A Deserter

For years, former state Rep. Kevin Haggerty portrayed his service as a Marine as nothing but honorable, but a federal... 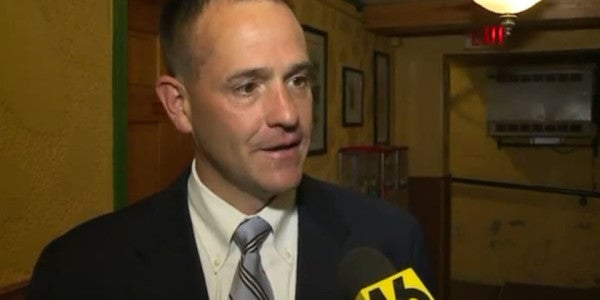 For years, former state Rep. Kevin Haggerty portrayed his service as a Marine as nothing but honorable, but a federal military document shows the Marines declared him a deserter and absent without leave for two months.

The Times-Tribune obtained the document Thursday from the National Personal Records Center after filing two federal Freedom of Information Act requests, the most recent on Sept. 27.

Mr. Haggerty, 44, of Dunmore, uses a picture of himself in Marine uniform in campaign literature and on his campaign Facebook page. A Democrat, Mr. Haggerty is seeking election to the 112th state House district in Tuesday’s election against Republican Ernest Lemoncelli.

He has ignored newspaper’s repeated requests to discuss the document and his campaign.

On Thursday evening, his campaign spokesman, Jeff Hemak, said Mr. Haggerty “has not had a chance to review this document and is unable to comment.”

Capt. Timothy Irish, a Marine Corps spokesman, said the corps does not comment on the service of specific Marines.

Two years ago, Mr. Haggerty showed the newspaper what he described as his official discharge form. That form, available only to military veterans, characterizes his 8½ months of active duty as a Marine as honorable and says he was released from the Marines because he completed his “required active service.”

He knows because he said he helped Mr. Haggerty file a request in June 2014 to obtain the discharge form and chronological record and saw both records once Mr. Haggerty obtained them.

“I’m 100 percent certain he has it because I helped him get it,” Mr. Fabricatore said.

The chronological record notes Mr. Haggerty’s status as a deserter as “970611 DROP/DCL DES.” The meaning of this abbreviation is in the Marine Corps Individual Records Administration Manual, which is available online. The numbers are the date, June 11, 1997, that Mr. Haggerty was declared a deserter.

The document shows he returned to active duty on July 21, 1997, as an assistant police sergeant, at Camp Lejeune, North Carolina, moved to the Marine Reserves on Sept. 13, 1997, as a cannoneer at a unit in Reading, and was officially discharged entirely from the Marines on Sept. 15, 1998.

The discharge mentions “time lost” for exactly the same dates, though the form offers no further explanation.

Mr. Haggerty refused repeated requests over the past month to discuss the discharge and the current campaign.

During a September 2014 interview — an interview he requested while he was a declared candidate for Lackawanna County commissioner — Mr. Haggerty, then the 112th state House district representative, said he did not know what the “time lost” numbers mean.

Mr. Haggerty said he asked to meet with the newspaper to clear up rumors that he was dishonorably discharged.

Related: I’m A Veteran. Here’s Why I Refuse To Vote In This Election »

“I served my country and my country gave me a discharge that ‘You did it under honorable conditions.’ And that’s it,” Mr. Haggerty said at the time.

The newspaper attempted to interview Mr. Haggerty again to answer more questions about his discharge, particularly on the meaning of the “time lost” numbers.

Instead, he sent texts to a reporter.

“You saw it, it’s honorable,” Mr. Haggerty wrote in one text.

“Tell the truth about my discharge, ok,” he wrote in another text. “Just tell the truth.”

The reasons he will not answer further questions remain unclear. Most of the other sections on the discharge form he provided and the document his critics provided show nothing out of the ordinary.

The circumstances of his discharge came up during his bitterly contested primary election campaign against fellow Democratic state Rep. Frank Farina in the spring of 2014. Rewriting of district boundary lines forced Mr. Haggerty, who represented the 112th, and Mr. Farina, who presented the 115th district, to run against each other for a new 112th district seat.

Mr. Haggerty addressed the issue of his military service publicly at least once — at a town hall meeting he hosted in December 2013 in Jessup.

Asked by an audience member about his veteran status, Mr. Haggerty said he served three years in the Marines, got hurt and was administratively discharged, which he said was neither an honorable nor a dishonorable discharge. He said he does not consider himself a veteran.

“I am a United States Marine. That’s something that can’t be taken away,” he told the audience member.

Mr. Haggerty lost the May 2014 primary election to Mr. Farina, but a month later declared he would run for commissioner in 2015. He later changed his mind and ran unsuccessfully for county clerk of judicial records.

This year, he ran against Mr. Farina for state representative again and defeated him in the April primary election, but Mr. Farina’s supporters and Mr. Haggerty’s critics continue to raise his military service.

Mr. Fabricatore said he is talking about the matter now because he is tired of “covering for him (Mr. Haggerty).”

Mr. Sabia said he got involved in exposing the chronological record to honor veterans.

“If Kevin came out and said ‘I was young and made a mistake,’ I might even vote for him,” Mr. Sabia said.

Mr. Haggerty continues to use his military service to promote his campaign.

A campaign card promoting his candidacy was mailed to thousands of voters this week and shows him in his formal Marine uniform. The same picture appears on his campaign Facebook page.

On Veterans Day, which is next Friday, Mr. Haggerty plans to host “fellow veterans” with “free coffee and donuts (sic) for our country’s bravest!”