Neo-Nazi group membership may not get you booted from the military, officials say

Membership in a white supremacist or neo-Nazi group won't necessarily get a U.S. service member tossed out of the military, defense officials told a House subcommittee Tuesday 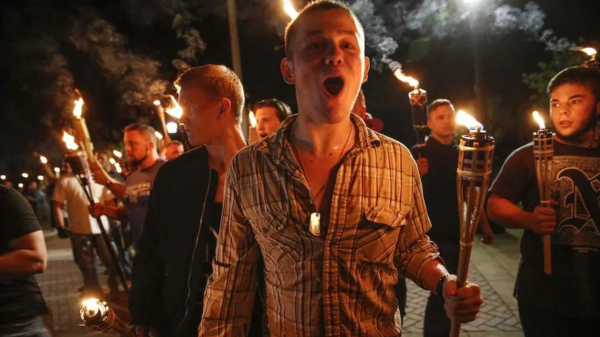 Editor’s Note: This article by Richard Sisk originally appeared onMilitary.com, a leading source of news for the military and veteran community.

Membership in a white supremacist or neo-Nazi group won’t necessarily get a U.S. service member tossed out of the military, defense officials told a House subcommittee Tuesday.

The officials, including representatives of Naval Criminal Investigative Service and the Army’s Criminal Investigation Division, appeared to make a distinction between membership in an extremist organization and “active participation” in deciding on recruitment and retention.

The officials also told a hearing of the House Armed Services subcommittee on personnel that they had no reliable data on how many service members had been administratively discharged for espousing white supremacist ideology or how many potential recruits had been barred from enlisting.

The testimony appeared to stun several members of the committee.

“I am flummoxed by what I’ve heard today,” Rep. Jackie Speier, D-California, chair of the Subcommittee, said after questioning Robert Grabosky, deputy director of Law Enforcement at the Air Force Office of Special Investigations.

Grabosky said that membership in a white nationalist group “is not prohibited,” but “active participation” in the group could lead to an administrative discharge, at a commander’s discretion.

“I find that astonishing,” Speier said. “If you’re a member, that’s an activity. I think we need to take a look at that.”

Rep. Trent Kelly, R-Mississippi, an Iraq veteran, brigadier general in the Army National Guard and ranking member of the subcommittee, said the bottom line for white nationalists in the military was, “what can we do better to keep ’em out and what can we do to get ’em out?”

In his opening statement, Kelly said “we don’t have a lot of reliable data” on the spread of extremist ideology in the military.

“The definitive data we do have comes from the Department of Defense, where there have been 21 criminal cases involving white supremacy over the last five years” in the service branches, Kelly said.

Several of the subcommittee members pointed to the case of Air Force Master Sgt. Cory Reeves, allegedly a leader in the Colorado branch of the supremacist group Identity Evropa, who posted racist memes and spread far-right propaganda.

In a separate panel at the hearing, advocacy groups warned of the spread of white supremacist and hate group ideology in the military.

“I want to start by saying that, right now, the white supremacist movement in the United States is surging and presents a distinct and present danger to this country and its institutions, including the U.S. Armed Forces,” said Lecia Brooks of the Southern Poverty Law Center.

“Recent investigations have revealed dozens of veterans and active-duty service members who are affiliated with white supremacist activity,” Brooks said.