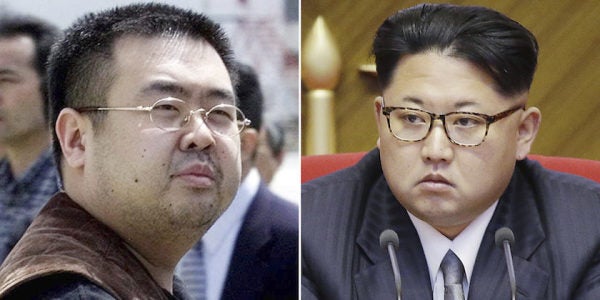 Malaysian police announced Friday that Kim Jong Nam, North Korean leader Kim Jong Un’s half brother, could have been killed by VX nerve agent, a highly toxic chemical compound banned by the United Nations as a weapon of mass destruction.

The announcement that police found traces of the nerve agent on Kim’s face has raised the stakes in a political murder mystery that has implicated several suspects — at least eight North Koreans and two Southeast Asian women — and raised tensions between North Korea and some of its Asian neighbors.

Kim Jong Nam, 46, was once considered a potential successor to his father, Kim Jong Il, and South Korean officials have accused Pyongyang of ordering his assassination. On Feb. 13, as Kim Jong Nam waited at the Kuala Lumpur airport, two women approached and apparently spread poison on his face, Malaysian police suspect.

He complained to airport staff that he felt dizzy, then died en route to a hospital.

The two women — one from Vietnam and one from Indonesia — are in custody, and at least one suffered the chemical’s effects. “She was vomiting,” Malaysia’s inspector general, Khalid Abu Bakar, told reporters.

Authorities were still trying to determine how VX entered Malaysia, the police official said. Leaked airport surveillance video shows the female suspects going to wash their hands after the attack, suggesting that they were trained to deal with the poison. Police said they practiced their assault at other Malaysian locations.

VX, first developed in Britain in the 1950s, is odorless and tasteless. It’s an oily liquid, amber in color, that evaporates slowly — about as fast as motor oil, according to the U.S. Centers for Disease Control and Prevention.

Nerve agents typically act rapidly, within seconds of exposure. They may be absorbed through the skin or through the respiratory tract. “Exposure to a lethal dose may cause death in less than 15 minutes,” according to a U.S. Central Intelligence Agency report on the chemical.

Daryl Kimball, executive director of the Arms Control Association in Washington, said experts have long suspected North Korea of developing a chemical weapons program. He called it “highly unlikely” that the poison came from any other country. VX nerve agent is banned by an international chemical weapons convention, but North Korea was not a signatory.

“If, as is widely suspected, Kim Jong Nam was assassinated — murdered under the direction of the North Korean government — and this is in fact VX nerve agent, this would confirm that North Korea has that type of chemical agent,” he said.

“So this has sort of a double meaning,” Kimball continued. “Whoever used this, first of all, had access to a very specialized, difficult-to-produce chemical. And they were probably not just trying to assassinate this person, but trying to send a message that they have VX nerve agent.”

North Korea at one time was thought to have at least eight chemical research locations, according to a 2005 report by the Wisconsin Project on Nuclear Arms Control, a nonprofit think tank in Washington. Several of those were thought to be near the border with its rival, South Korea.

North Korea has refused to acknowledge that the man killed in Malaysia is Kim Jong Nam, who had been living in exile in China. Instead, the government-controlled media has referred to him as a “citizen of the DPRK.”

Earlier this week, Malaysian police reported an attempted break-in at the morgue where Kim Jong Nam’s body was being held. They did not give further details.

On Thursday, the North Korean state news agency KCNA denied that he was “poisoned to death,” insisting that he died of a “heart stroke.” Malaysian police “recklessly made (the poisoning) an established fact, only to make matters complicated,” it said.

The report accused Malaysia of carrying out the autopsy “in disregard of the DPRK’s just demand and international law.”

Four North Korean suspects left Malaysia on Feb 13 — the same day the incident happened — according to police. At least three others have been implicated by police, including one high-ranking diplomat in North Korea’s embassy in Kuala Lumpur. Another North Korean, a scientist working in Malaysia, has been detained.

Raymond Zilinskas, who directs the chemical and biological nonproliferation program at the Middlebury Institute of International Studies at Monterey and has worked as a consultant on biological weapons for the television spy drama “The Americans,” said that when he first heard the news about Kim Jong Nam’s death, “I thought for sure it was going to be chemical.”

Zilinskas, who initially suspected cyanide, said VX destroys an enzyme that regulates the twitching of muscles. Anyone exposed to sizable amounts would almost immediately lose control of their tear ducts, nasal passages and urinary functions, among other things, he said.

“When that happens, the muscles go crazy,” he said. “If you’re being exposed to a fair amount, you’re going to die very quickly, sometimes in five minutes.”

Zilinskas is still somewhat skeptical about the VX determination by Malaysian authorities, because VX in liquid form can soak into the skin. “It’s puzzling that you have these assassins being able to reach Kim and smear his face with what the Malaysians say is VX,” he said. “How did the assassins survive?”

Hypothetically, he said, it’s possible the assassins used a “binary” mixture that relies on two less toxic substances. The United States has in the past developed this split mixture.

When combined, the two chemicals form the more deadly VX. It might be possible, for example, that each woman carried a single chemical component of the deadly agent and mixed them on Kim Jong Nam’s face. That might explain how the assassins walked away, he said, stressing that the discussion was hypothetical.