A tall, black, shaggy giant schnauzer has been turning heads since becoming a member of the U.S. Air Force’s 100th... 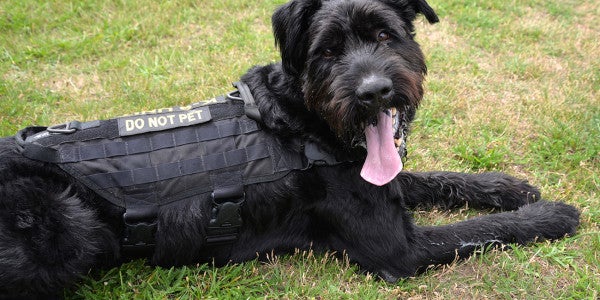 A tall, black, shaggy giant schnauzer has been turning heads since becoming a member of the U.S. Air Force’s 100th Security Forces Squadron two and a half years ago.

Brock is the first giant schnauzer to work alongside German shepherds and Belgian Malinois for the Department of Defense in more than 30 years.

“We just got the luck of the draw with Brock,” Webster said. “His personality is out of this world. He’s almost a hundred pound dog but runs around and looks like a big puppy.”

Brock was originally intended for the Transportation Security Administration, but the TSA only accepts sniffer dogs that aren’t trained to bite.

After arriving to RAF Mildenhall, Brock teamed up with first-time handler Staff Sgt. Dominick Young. He said they initially struggled to bond during the 45-90 day validation process to become fully certified for security operations.

Military Working Dog Brock, 100th Security Forces Squadron, looks through a concrete pipe as he prepares to run through it during an obedience training session July 11, 2017,U.S. Air Force photo

“It was rough at first because he’s one of those dogs where you need to gain his trust and respect,” Young said. “I came in on my days off to take him on walks and play with him and that’s pretty much all it took.”

Now they protect the base during 12-hour shifts at night and recently worked alongside Secret Service dog teams as part of the security detail for President Donald Trump’s visit to the G-20 Summit in Hamburg, Germany.

Young said even the Secret Service agents were surprised to see Brock in uniform.

“They’ve never seen a giant schnauzer (in uniform) either, so I got the same reaction from them,” Young told Stars and Stripes.

The U.S. military began enlisting the breed for military service during World War II. But after the war, German shepherds gradually became the preferred military dog.

Brock is the only Giant Schnauzer military working dog in the Department of Defense.U.S. Air Force photo

Young will have to pass on his canine partner to a new handler when he transfers to a new assignment in February.

“I’ll be devastated,” Young said. “I’ve built such a close bond with him.”