The Department of Veterans Affairs on Tuesday officially dedicated a new call center for its veterans crisis line — an... 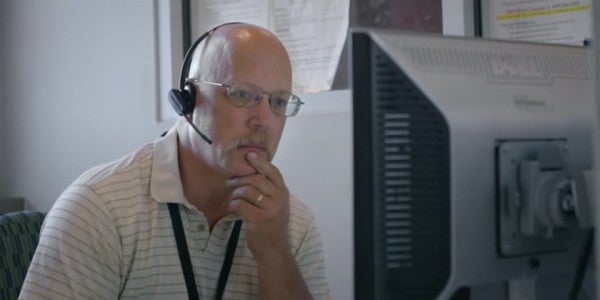 The Department of Veterans Affairs on Tuesday officially dedicated a new call center for its veterans crisis line — an addition that’s nearly doubled the agency’s capacity to help suicidal veterans and service members.

The dedication of the new call center, located in Atlanta, comes at the end of a year in which it was revealed the crisis line was sending calls to voicemail or rolling them over to a backup call center.

“Today we follow through on our commitment to give those who save lives every day at the crisis line the training, additional staff and modern call center technology they need to make the veterans crisis line a gold standard operation,” VA Deputy Secretary Sloan Gibson, who attended the ribbon-cutting Tuesday, said in a written statement.

The Atlanta facility will have 200 responders who will be able to handle 600 calls daily. They’ve joined 310 responders at the VA’s other call center in upstate New York to answer calls, texts and online messages from veterans, servicemembers and their families. VA officials did not say how many calls they receive each day, overall.

Related: How Many People Have Really Been Fired Over VA Wait Time Scandal? »

Though the hub wasn’t dedicated until Tuesday, employees in Atlanta started work in October.

As of Dec. 8, the crisis line was answering 44 percent more calls than it was in March, according to the VA. But calls are still being rolled over to backup call centers.

When phone lines are busy, calls from veterans and servicemembers are routed to another contracted call center. A VA inspector general report released in February stated employees and volunteers in the backup call centers lacked training to handle crises. It also confirmed calls at the backup centers were being sent to voicemail, and some veterans and servicemembers seeking immediate help were never called back.

According to the report, callers also criticized the crisis line after being put on hold with “long wait times” to hear from a responder. Inspectors weren’t able to determine how long veterans were waiting on hold, but said in some cases veterans were placed in a queue or passed through several backup call centers.

Gregory Hughes, a former director of the crisis line, resigned several months after the report came out. In September, The Associated Press obtained internal emails from Hughes that said an average of 35 to 40 percent of crisis calls received in May rolled over to a backup call center.

Lawmakers responded by passing legislation, the “No Veterans Crisis Line Call Should Go Unanswered Act,” requiring the VA to ensure calls made to the hotline are answered “in a timely manner.” For backup centers, the VA defines “timely access” as 90 percent of calls being answered within 30 seconds from when they’re routed from a main call center.

The legislation mandates VA leadership develop specific performance measures for the crisis line and a plan to test the two call centers and the contracted backup centers. President Barack Obama signed the bill into law in November.

VA leaders said they will continue to hire more responders to meet the high demand. They expect the Atlanta and New York centers to be able to answer every call soon, and get away from routing calls to backup centers.

In March, 30 percent of calls were sent to the backup call centers, according to the VA. That’s since dropped to 16 percent, the VA said.

According to VA data, the crisis line answered 510,000 calls in fiscal 2016 and responded to 53,000 online chat requests and 15,000 texts. They dispatched emergency services 12,000 times to veterans, servicemembers or their families.

Call responders made 86,000 referrals for veterans or servicemembers to seek aid from suicide prevention experts in their communities.

A VA study released in July found approximately 20 veterans commit suicide each day. Of the 20, six use VA services.

To reach the veterans crisis line, callers dial the National Suicide Prevention Hotline at 1-800-273-8255 and choose option 1. They can also text to 828255 or request a chat at www.vets.gov.