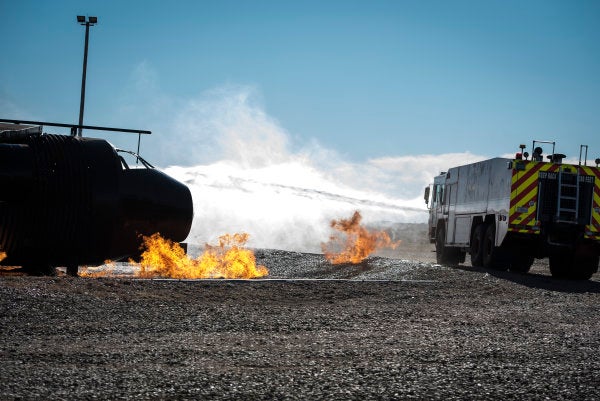 New Mexico Environment Secretary James Kenney says the Air Force has not come up with an acceptable schedule or long-term plan to clean up contamination of the groundwater at Cannon and Holloman Air Force bases.

He said that is the motivation for the lawsuit filed Tuesday in U.S. District Court by the New Mexico Environment Department and the state Attorney General's Office against the Air Force.

The complaint alleges violations of the state's Hazardous Waste Act and that contamination constitutes an imminent and substantial danger to communities on and off base. Cannon is located near Clovis, and Holloman is near Alamogordo.

“In our discussions, if they had a proposed timeline that was acceptable, we wouldn't be at this point,” Kenney said.

The discussions with the Air Force are confidential, but NMED spokesperson Maddy Hayden said, “What we were told was unacceptable.”

“No one has a right to pollute New Mexico's vital water resources,” Attorney General Hector Balderas said in a news release. “We will fight to ensure that New Mexico families and military families have access to safe, clean water. Air Force Secretary Heather Wilson must do the right thing.”

Kinkade said the Air Force acted immediately “by providing alternate water and then began working with the community and regulators on identifying and implementing a better long-term solution to prevent exposure.”

Kenney said the Air Force has identified some of the contaminated areas and had taken some remedial steps, but not enough work has been done.

One of the issues that led to the lawsuit, Kenney said, was a failure by the Air Force to fully identify the extent of the contaminated groundwater water plumes at both bases.

He said delineating the groundwater plumes “would be a good first step.”

The suit claims public and private water sources have been contaminated with concentrations of polyfluoroalkyl and perfluoroalkyl substances, or PFAS. PFAS are suspected carcinogens that were in fire-suppressant foam formerly used by the Air Force.

Kenney said the foam containing PFAS had been used to fight fires and during training exercises at both bases.

The suit claims the foam had been used at Cannon for decades.

Air Force sampling found PFAS in wells both on and off base “which supply drinking water and livestock and irrigation water to local dairies,” according to the suit.

Kenney said the Air Force notified the state about the contamination at Cannon in 2018. In November, the Environment Department issued a “notice of violation” to the base when dozens of private wells, including two that supply dairies, had PFAS levels three times the advisory level.

“The fact that Cannon sits on the Ogallala Aquifer is a concern,” Kenney said. “It serves water systems in (multiple) states.”

Kinkade said the Air Force has been working with residents affected by the Cannon contamination to design and implement point-of-use filtration systems.

“In addition, we are expanding our evaluation and continue taking action where necessary to protect people from exposure to drinking water that contains PFOS and PFOA at levels above the (Health Action Level) and is probably at least partially attributable to Air Force activities at Cannon,” Kinkade said.

In the case of Holloman, the NMED served the base with a “notice of violation” last month after monitoring wells tested at twice the acceptable levels for the contaminants. The Air Force reported groundwater concentrations of PFAS at 137 parts per trillion at monitoring wells.

“At Holloman Air Force Base, we collected samples from on-base monitoring wells during the summer of 2018,” Kinkade said. “Four groundwater samples came back above the LHA levels for PFOS and PFOA, but the groundwater is not fit for human consumption for reasons that are unrelated to PFOS/PFOA contamination or other contamination from Air Force activities.”

Kenney and Kinkade both said Kirtland Air Force Base, which is not a part of the suit, does not have the same PFAS issue. PFAS has been detected on the base, Hayden said, but it was below EPA standards for contamination.

Information on the EPA's website indicates that exposure to PFAS can lead to cancer, thyroid disorders and low infant birth weights.

Sampling at Cannon and Holloman in continuing, according to the suit.

The suit seeks to require the Air Force not only to clean up the contamination, but also to pay for abatement activities.

WATCH NEXT: What To Do In A Firefight, According To A Medal Of Honor Recipient