Editor’s Note: This article by Matthew Cox originally appeared on Military.com, a leading source of news for the military and veteran... 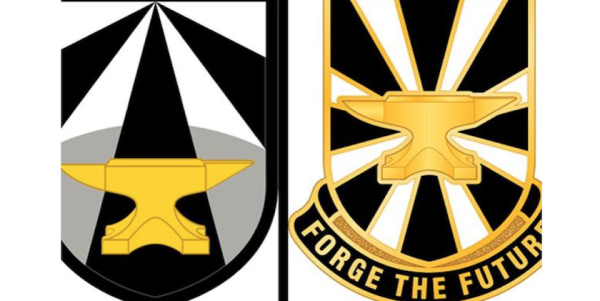 Soldiers assigned to the new Army Futures Command have both a new shoulder sleeve insignia and distinctive unit insignia. Both carry a central theme, an anvil, as a symbol of the unit's motto “Forge the Future.”

The patch and unit insignia have black and white stripes stretching outward from the anvil, which is meant to represent fortitude, determination and perseverance, according to a recent Army press release.

“Symbols mean things just like words do,” Robert Mages, the command's acting historian, said in the press release. “It's a reminder to the soldiers that wear the patch of the mission that they've been assigned, and of the responsibilities that come with that mission.”

Army Futures Command was stood up in late August and charged with leading the Army's 10-year modernization effort.

Army leaders selected Austin, Texas as the home of AFC headquarters after an exhaustive screening of 30 major U.S. cities. The ideal location needed to have made significant investments in economic development, STEM, and research and development, as well as offer quality of life for Army personnel assigned to AFC headquarters, Army officials maintain.

The black, white and gold used in patch and unit insignia resemble the colors of the U.S. Army, the release states.

Army Futures Command is scheduled to be up and running at full operational capability by next summer.