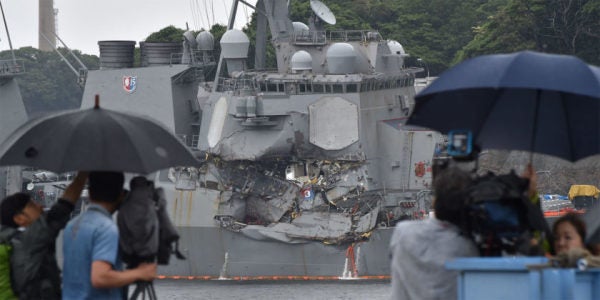 In the wake of two major Navy ship collisions in the Pacific this summer that caused the deaths of 17 sailors, government oversight officials found nearly 40 percent of warfare certifications for Japan-based surface combatants were expired, and scaled-back crews have increased the workload for sailors in the Pacific.

John Pendleton, the Government Accountability Office director for defense force structure and readiness issues, was set to discuss the office's findings Thursday at a House Armed Services Committee hearing on the causes of the two recent collisions.

Military.com reviewed a copy of his testimony ahead of the hearing. CNN first reported its contents.

The findings, the report suggests, call into question not only the Navy's strategy for operating forward-deployed ships, but its ability to adequately maintain and operate the larger fleet it wants.

The service has called for growth to a 355-ship Navy, up from its current fleet of 277.

“Looking to the future, the Navy has plans to grow its fleet by as much as 30 percent, but it has not yet shown the ability to adequately man, maintain, and operate the current fleet,” Pendleton wrote in his prepared testimony.

“These readiness problems need to be addressed and will require the Navy to implement our recommendations — particularly in the areas of assessing the risks associated with overseas basing, reassessing sailor workload and the factors used to size ship crews, and applying sound planning and sustained management attention to its readiness rebuilding efforts,” he wrote.

The GAO found that a lack of scheduled training periods for Pacific-based ship crews contributed to the crews increasingly continuing to operate with expired warfare certifications, including certifications for seamanship.

As of June of this year, the office found, 37 percent of warfare certifications for all cruisers and destroyers homeported in Japan were expired, a fivefold increase since May 2015.

In the last decade, the Navy has doubled the percentage of its ships homeported overseas, with an emphasis on expanding its presence in the Pacific as part of the service's pivot to that part of the world.

However, the GAO found in 2015 that Japan-based cruisers and destroyers lacked dedicated time for training and sustainment in keeping with the Navy's own optimized fleet response plan, and instead practiced training “on the margins” — whenever time and conditions allow.

Damage to the portside is visible as the guided-missile destroyer USS John S. McCain (DDG 56) steers towards Changi Naval Base, Republic of Singapore, following a collision with the merchant vessel Alnic MC while underway east of the Straits of Malacca and Singapore.U.S. Navy photo

The more recent report found moreover that the Navy was taking risks by scaling back crew size and piling work onto remaining sailors, who sometimes work more than 100 hours a week while deployed.

The Navy in 2001 began reducing crew size in its “optimal manning” initiative, designed to complement manpower with new technology.

In 2010, the service concluded the initiative was adversely affecting readiness, and phased it out in the years that followed.

But the GAO found crew sizes and personnel costs remained somewhat scaled back, and that crews were further reduced during in-port periods, which increased sailors' workload then.

Investigations continue into the cause of the collisions of the destroyers John S. McCain and Fitzgerald with commercial vessels in two separate incidents in the Pacific this summer.

The McCain collided with a Liberian-flagged tanker east of the Straits of Malacca near Singapore Aug. 21, resulting in the deaths of 10 sailors aboard.

On June 17, the Fitzgerald collided with a Philippine-flagged cargo ship off the coast of Japan, killing seven Navy sailors.

Earlier in the year, two other surface ships in the Pacific also experienced mishaps: The cruiser Antietam ran aground outside Yokosuka Naval Base in late January, and the cruiser Lake Champlain collided with a small South Korean fishing vessel in May.

The two deadly collisions within months of each other represent disasters unprecedented in recent years.

Since 2009, there have been only 16 collisions or groundings of any kind involving Navy vessels, and only one other resulted in a fatality: a 2012 incident in which a special operations craft collided with a civilian fishing boat near the Philippines, killing a fisherman.

Moran and the Navy's director of Surface Warfare, Rear Adm. Ronald Boxall, are set to testify before the House Armed Services Committee on Thursday alongside Pendleton.