The AK-12 assault rifle has passed military field tests and meets all of the Russian armed forces' design and operational... 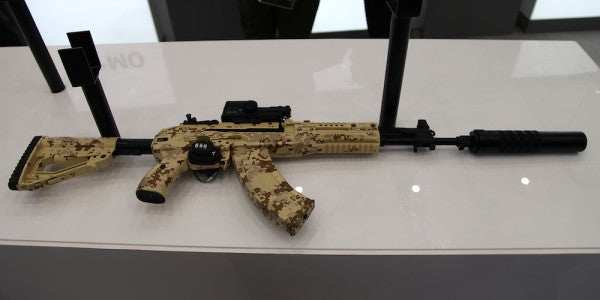 The AK-12 assault rifle has passed military field tests and meets all of the Russian armed forces' design and operational standards, gunmaker Kalashnikov Concern says, according to Jane's 360.

The AK-12's success in military trials sets it up to become the standard weapon for soldiers in Russia's Ratnik — or Warrior — future weapon system.

Work on the AK-12 began in 2011 with the AK-200 as a base model. Kalashnikov Concern presented prototypes in early 2012, and the first generation of the weapon was also successful in military tests.

However, according to Jane's, the Russian military requested design alterations and wanted the new weapon to be cheaper to make. The company then produced the second-generation version of the weapon, using a 5.45 mm round with the AK-400 as its base model. The second-generation model also addressed issues regarding full-automatic fire.

A 5.45mm AK-12 assault rifle by Kalashnikov Concern on display at the t the “ARMY-2017” International Military-Technical Forum in Moscow in October 2016.Photo via Vitaly V. Kuzmin/Wikimedia Commons

Both the AK-12 and the AK-15 keep some traditional Kalashnikov features and are compatible with magazines used by earlier versions of the AK-74 and the AKM rifles, according to Modern Firearms. The new weapons are designed to offer better accuracy in all conditions, can be fitted with add-ons like sighting equipment and bayonets, and can carry a 40 mm grenade launcher under the barrel.

Arms experts have said the AK-12 is not a grand departure from the AK-74, which is the current standard weapon for the Russian military.

“There are improvements but very modest on the background of excessive expectations triggered by a media campaign,” Mikhail Degtyarev, editor-in-chief of Kalashnikov magazine, told Army Recognition in May, making specific mention of ergonomic improvements.

Nor do observers see the wholesale replacement of the AK-74 on the horizon, as that weapon is “a very successful design but … needs modernization,” military expert Viktor Murakhovsky told Army Recognition. “It is necessary to considerably improve combat engagement convenience, including ergonomics, and provide a possibility to mount additional devices.”

The AK-400 prototype from which the AK-12 was derived.Photo via Wikimedia Commons

Alongside the AK-12/AK-15 package, Kalashnikov Concern has been working on an AK-74 upgrade that includes a folding and telescoping stock, rails for add-ons, and a more ergonomic fire selector and handgrip.

The Russian military has been designing and testing a variety of futuristic gear for the Ratnik program over the past year.

According to Russian state-owned outlet RT, the country's military has also debuted a combat suit with a “powered exoskeleton” that purportedly gives the wearer more strength and endurance, as well as high-tech body armor and a helmet and visor covering the entire face.

The suit, however, remains a few years from production, and it's “unclear whether these type of suits will eventually make it to the battlefield,” Stratfor analyst Sim Tack told Business Insider in June.