Suspected of pointing a laser at an Army National Guard helicopter on Wednesday night, Robert Simione, 72, of Mount Sinai, was arrested and charged with a misdemeanor for reckless endangerment 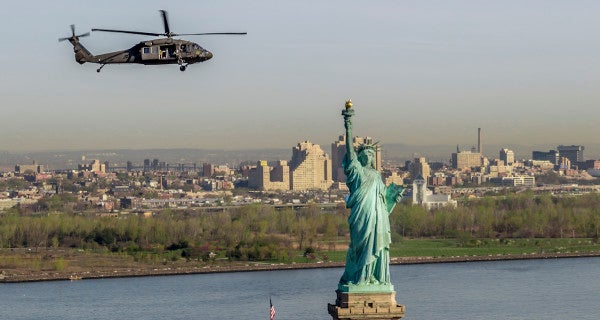 Suspected of pointing a laser at an Army National Guard helicopter on Wednesday night, Robert Simione, 72, of Mount Sinai, was arrested and charged with a misdemeanor for reckless endangerment, Suffolk County police said.

Wearing night goggles, which intensify light, the crew were on a routine training mission in their UH-60 helicopter, said Eric Durr, spokesman, New York Army National Guard, by telephone. The Army calls that model, made by Sikorsky, the Black Hawk.

Using their GPS system, “They basically just took a lock on where the beam was coming from and reported it to the police,” he said.

The Town of Islip reported the crime around 9:45 p.m. while the helicopter was flying about 10 miles northeast of Long Island MacArthur Airport in Ronkonkoma, the police said in a statement early Thursday.

Aiming a laser pointer at an aircraft has been a federal crime since 2012, according to the Federal Aviation Administration's website. This happened more than 5,600 times last year, it says.

The national guard requires its pilots to file a minimum number of hours every year with night goggles, Durr said.

That equipment can magnify the potential danger of a laser beam. The beams also can disrupt a pilot's focus.

“Laser light can be damaging to anybody's eyes,” Durr said. “If you're flying, obviously anything that might distract you from what you are trying to do is a danger.”

Laser beams can travel considerable distances; any dirt or even small flaws in an aircraft's windshield can worsen the glare, experts said.

Simione's arraignment has yet to be scheduled.

SEE ALSO: Mystery Lasers Are Messing With US Pilots Near A Critical Overseas Base

WATCH NEXT: The Navy Demonstrates A New Laser Weapon On The USS Ponce