The NYPD is sending $6,000 worth of medical supplies, toys, shampoos, nail clippers and thank-you letters to Afghanistan this weekend. 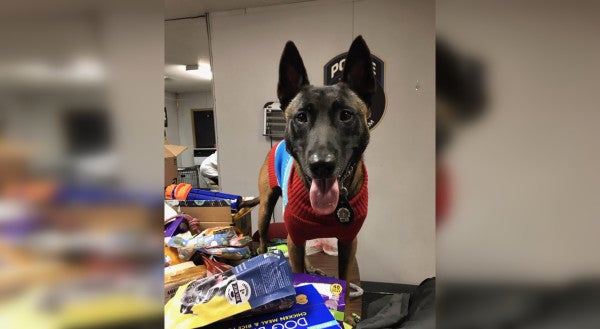 The crime-fighting dogs of the NYPD offered a helping paw to their canine counterparts serving overseas this holiday season — collecting doggie supplies and treats for Yuletide care packages.

The NYPD's ESU K9 Unit helped gather about 30 boxes of medical supplies, toys, shampoos, nail clippers and thank-you letters from school children over the past several days as part of “Operation War Dogs.” The nearly $6,000 in supplies will be shipped out to Afghanistan over the weekend.

“They're a big part of policing,” Blue Lives Matter founder Joseph Imperatrice said of the hero pooches Wednesday. “Being able to highlight them and their handlers goes a long way in boosting morale.”

On Nov. 27, K9 officers Timoshenko and Russel — both named after officer Russel Timoshenko, who was slain in the line of duty in 2007 — visited PS 373R on Staten Island as part of the collection drive.

“We told K9 Russel he could keep one thing, and he chose the sweater,” the NYPD tweeted out Wednesday, along with a grinning photo of the rookie canine cop. “As part of 'Operation War Dogs,' @NYPDSpecialops K9s & their partners collected donations for dog toys, treats & equipment. The supplies will be shipped to good boys & girls on military deployment overseas.”