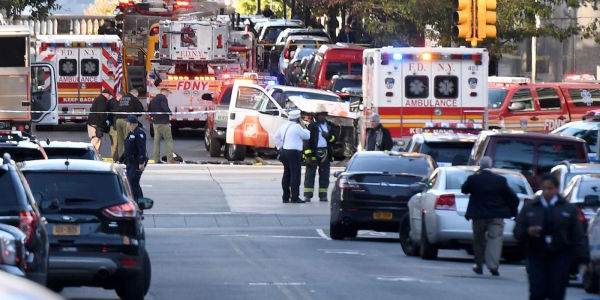 The suspect charged Wednesday in the first deadly terrorist attack in New York City since Sept. 11, 2001, became radicalized by watching Islamic State videos on his cellphone and struck on Halloween to kill as many people as possible, authorities said.

Sayfullo Saipov, 29, was charged in federal court with supporting Islamic State extremists and vehicular violence after officials said he drove a rental truck down a busy riverfront bike path near the World Trade Center in lower Manhattan a day earlier, killing eight people and injuring at least a dozen. He was arrested after a police officer shot him in the abdomen.

While hospitalized, Saipov — a trucker and an Uber driver who legally came to the U.S. from Uzbekistan in 2010 — reportedly told law enforcement officials that he had turned to radicalism a year ago after watching a video of Islamic State leader Abu Bakr al-Baghdadi asking what Muslims in the U.S. were doing about the deaths of Muslims in Iraq.

Investigators inspect a truck following a shooting incident in New York on October 31, 2017. Several people were killed and numerous others injured in New York on Tuesday when a suspect plowed a vehicle into a bike and pedestrian path in Lower Manhattan, and struck another vehicle on Halloween, police said. A suspect exited the vehicle holding up fake guns, before being shot by police and taken into custody, officers said.Photo via AFP/Getty Images

Saipov said he started planning the truck attack two months ago. He asked for an Islamic State flag to be draped in his hospital room and said “he felt good about what he had done,” according to court documents.

But if the attack was meant to bring New York City to its knees, New Yorkers instead largely brushed it off, holding Halloween festivities as usual, taking their kids to school and switching out decorations for the upcoming winter holidays — shaken, but determined to push forward.

Jenny Sheffer-Stevens took her son Hutch, 12, back to school at IS 289 Middle School, which sits near the intersection where Saipov’s rented truck had hit a school bus. Hutch had seen the end of the attack, and the school gave him the option to stay home.

Sheffer-Stevens and her son decided against it — they wanted “a balance between business as usual and keeping the conversation going,” she said.

The New York City Marathon, which typically draws tens of thousands of runners, was expected to be held as scheduled on Sunday.

In Washington, Saipov’s immigration history and apparent extremism prompted the Trump administration to respond more aggressively than it did after the Oct. 1 mass shooting in Las Vegas that left 58 people dead. The administration at that time urged caution as investigators gathered facts.

The White House and some members of Congress on Wednesday referred to Saipov as an “enemy combatant.”

Taking aim at congressional Democrats, President Trump called for Congress to crack down on U.S. immigration programs, including the Diversity Immigrant Visa Program that Saipov used to enter the U.S.

Trump also criticized the judicial system’s handling of terrorism cases, which are addressed in federal court and typically bring convictions and long prison sentences a year or two after arrest.

“We also have to come up with punishment that’s far quicker and far greater than the punishment these animals are getting right now,” Trump said.

Sen. John McCain (R-Ariz.) told reporters at the Capitol that Saipov should be taken to the U.S. jail in Guantanamo Bay, Cuba. Saipov should not be read Miranda rights to remain silent because enemy combatants are not entitled to such rights, McCain said in a separate statement.

Sen. Lindsey Graham (R-S.C.), who called the attack heartbreaking, also said Saipov “should be held as an enemy combatant under the law of war,” saying ample evidence suggests the suspect was motivated to kill by radical Islamic thought and acted in allegiance to Islamic State.

The Trump administration said the president would support sending Saipov to Guantanamo.

Later in the day, however, prosecutors announced that Saipov was criminally charged in the federal Southern District of New York, suggesting that his case will be handled similarly to other recent terrorism cases.

A school bus is seen with its rear side damaged near the scene of a deadly shooting along the bike path near Stuyvesant High School, Tuesday Oct. 31, 2017, in New York.Photo via Associated Press

And the issue of Miranda rights didn’t seem to matter, as Saipov had waived his right to remain silent, according to court documents, which said investigators had found 90 videos and 3,800 images related to the Islamic State on Saipov’s phone, including some that showed the gruesome torture and executions of the group’s prisoners.

A roughly two-mile stretch of highway in lower Manhattan was shut down for the investigation. Authorities also converged on a New Jersey apartment building and a van in a parking lot at a New Jersey Home Depot store, where Saipov was thought to have rented a flatbed truck for a 75-minute time period — with no intention to return it, according to court documents.

Saipov had also rented a truck on Oct. 22 to practice his turns, and he initially thought of carrying out the attack with Islamic State flags on his windows, before deciding that doing so would draw too much attention, officials said.

After Saipov carried out his attack Tuesday afternoon, he emerged from the truck shouting “Allahu akbar” — “God is great” in Arabic — and carrying paintball and pellet guns that resembled real guns. Officials said there were knives and a stun gun at the scene, along with a document in English and Arabic written by Saipov that said Islamic State “will endure,” documents said.

On Wednesday, investigators announced they were seeking another Uzbek man, Mukhammadzoir Kadirov, 32, for questioning about the case, but a short time later said they were no longer looking for him. They declined to provide further information.

The attacker’s victims reflected a city that is a melting pot and a magnet for visitors: One of the dead was from Belgium. Five were from Argentina and were celebrating the 30th anniversary of a school graduation, according to officials in those countries. The injured included students and employees on a school bus that the driver rammed.

“This was an act of terror, and a particularly cowardly act of terror aimed at innocent civilians, aimed at people going about their lives who had no idea what was about to hit them,” said Mayor Bill de Blasio.

An Ohio-linked Facebook account with a similar spelling of Saipov’s name, which has since been removed, revealed little about its owner other than an apparent interest in cars and that he studied at the Tashkent Moliya Institute in Uzbekistan.

A fellow Uzbek truck driver in Ohio, Mirrakhmat Muminov, told the Associated Press that Saipov was “not happy with his life” and bickered with friends and family.

Saipov had lost his license because of traffic tickets and companies stopped hiring him, Muminov said. Saipov then moved to New Jersey, where his truck engine reportedly blew up a few months ago, which “probably hurt him more than anything,” Muminov said.