Earlier this month, C.J. Chivers at the New York Times dropped a bombshell report revealing after we invaded Iraq in … Continued 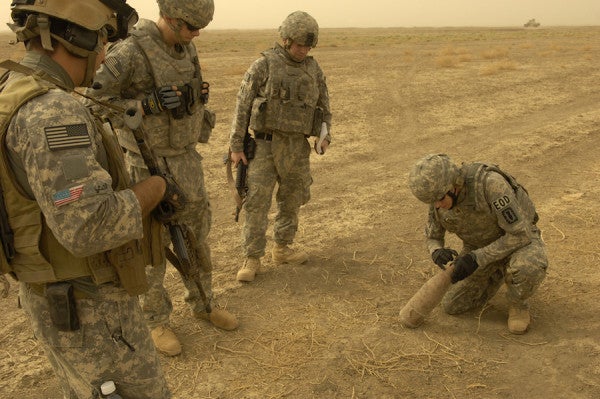 Earlier this month, C.J. Chivers at the New York Times dropped a bombshell report revealing after we invaded Iraq in 2003, the Pentagon covered up casualties from chemical weapons left behind by Saddam Hussein. The story was immediately seized by many conservatives as proof President George W. Bush was right to launch the Iraq War in order to track down those weapons — weapons which, until now, were thought to have never been found.

.@BenjySarlin Can we also agree that those who mocked any statement that there were WMD's in Iraq in '03 & '04 were/are wrong?

At around 2 a.m. one silent Iraqi morning in the Fall of 2005, I stood by my Humvee waiting to start a mission. My convoy escort team was about to drag 20 empty civilian 18-wheeler trucks from Camp Anaconda all the way south to Tallil, our home base, near the ancient city of Ur. To get there, we’d take an eight-kilometer dirt road to Route Tampa, follow Tampa to Baghdad’s outskirts, weave around the perimeter of the city, hit open highway and head “home.”

Convoys were usually deathly boring. Until something blew up. Or tracers flew by. We’d keep our heads on swivels, scan the highway like mad and tense up at anything unusual. We did our best to spot an IED before it could hit us, but knew we’d probably never see the one that did. The road between Anaconda and Baghdad was a long stretch of blackened craters, evidence of countless attacks on convoys just like ours. Even then, less than three years into the war, hundreds of Americans had been killed by whatever made those craters. Nothing said we wouldn’t be next.

Sometimes we’d see others get hit. If an IED detonated on a convoy or patrol ahead of us, I always had a guilty sense of relief. That was one less that could get us.

That fall night, shortly after we weaved out of Anaconda’s gate, we saw an intense, brief flash in the distance. In the commander’s seat of the Humvee, I couldn’t hear the sound. But I knew what it was. An IED had just detonated several kilometers away on Route Tampa. Over the radio, we heard a patrol report the attack. We kept rolling.

Just after we turned onto Tampa, a Humvee blocked the road ahead. A soldier dismounted to tell our lead vehicle commander that they were waiting on Explosive Ordnance Disposal to clear the area. Nobody had been hit, which was good news.

But there was also bad news. Pretty significant bad news.

When the IED blew, some kind of caustic chemical splashed across the hood of a Humvee and ate through part of it. Two gunners inhaled fumes and were waiting on a medevac. The route patrol didn’t know what the chemical was.

Our lead soldiers relayed the information by radio. My driver and I looked at each other. I don’t remember anyone saying anything about it, but I do remember a thought crossing my mind: We might need gas masks. A secondary IED could blow more of that chemical onto us.

Of course, we had masks. Double wrapped in heavy trash bags, padlocked in a tough box, locked in the Humvee’s cargo area, inaccessible. It was Iraq, bro. Nobody wore a gas mask on their thigh like the good old days. There was no reason at all to think we’d ever need that crap. Until that night.

Hours later, when the scene was cleared, we Charlie Miked south. I never found out what that chemical was. And I didn’t think much about it, until last week when I read the New York Times’ report about chemical weapons in Iraq.

The Times’ report detailed numerous incidents of American and Iraqi soldiers encountering chemical munitions. Some artillery shells loaded with mustard gas were used in IEDs. For various reasons, those reports were kept from the public. Soldiers affected by the munitions, even those who suffered mustard gas burns, were ordered to stay quiet.

Many right-wing web sites, eager to rejoice in what had to be an “I told you so” moment, were quick to share the Times’ article. See? There WERE WMDs in Iraq! President Bush has been vindicated!

I spent almost a year in Iraq performing a dangerous, frustrating, usually boring, but occasionally terrifying mission. I risked leaving my wife a widow and my children fatherless. I tried then, and still try now, to convince myself that my presence in Iraq served a larger, worthwhile purpose. And who knows, maybe it did.

Maybe Saddam Hussein truly needed to be brought down, although his removal seems only to have freed all the extremists he kept crushed under his heel. Maybe we were right to turn Iraq into a “democracy,” although it seems to remain as same tribal and sectarian society as always, only now with a veneer of democracy rather than dictatorship. And maybe we accomplished something by creating a battlefield far from America, a place to fight extremists that wasn’t in our own streets and backyards. Thus far, that’s the only argument that makes much sense to me.

But saving the world from Iraq’s chemical weapons? Not so much. I didn’t buy it then, and despite the Times’ article, I don’t buy it now.

Iraq’s chemical munitions were no secret. Saddam used them during the Iran-Iraq War, and Iran may have used them as well. Iraq’s chemical weapons stockpiles were built with Western assistance, and in some cases, bought directly from western countries (I recently heard the quote, “Of course we know Iraq has WMDs. We can show you the receipts.”) Those of us old enough to have served during Desert Shield/Desert Storm remember the dire predictions of mass casualties from the chemical weapons we knew Saddam had back then.

The chemical munitions our troops encountered in Iraq weren’t top-of-the-line, recently produced weapons. They were 1980s or 1990s-manufactured, rusting pieces of junk that in some cases had broken open and leaked. Yes, they were still dangerous. But they were in such bad shape they could no longer be used as intended. They had, for all intents and purposes, been discarded years before we invaded, and certainly were not “proof” of impending danger to Americans. They were just confirmation of what we had known for years to be true.

“From 2004 to 2011, American and American-trained Iraqi troops repeatedly encountered, and on at least six occasions were wounded by, chemical weapons remaining from years earlier in Saddam Hussein’s rule,” Chivers writes.

We didn’t invade Iraq to protect America from a discarded stockpile of chemical artillery shells. I didn’t dodge IEDs on Iraq’s highways for a year to ensure my home state of Texas was safe from roving bands of extremists armed with falling-apart mustard gas rounds. Just like those on the far right, I’d love to suddenly discover evidence that retroactively justifies our decision to invade Iraq, and gives worth to my personal service there. But this “discovery,” this revelation that Saddam still possessed the deteriorating remnants of a once-powerful chemical weapons inventory, isn’t it. My second-hand encounter with what may have been a chemical weapon in Iraq didn’t somehow lend credence to Operation Iraqi Freedom.

I’ve pulled what worth I can from my time in Iraq. I served with some outstanding people. I learned a lot about leadership, soldiering and life in general. I’ve accepted what I accomplished, and what I didn’t. I’m proud to be an Iraq veteran. I don’t listen to the hysterical fools screaming, “It was just for oil and those soldiers are all war criminals.” And I won’t listen to those on the other side screaming, “Those old chemical shells prove the entire war was justified.” Because both of those claims are wrong.