The Newly Restored USS Constitution Returns To The Water 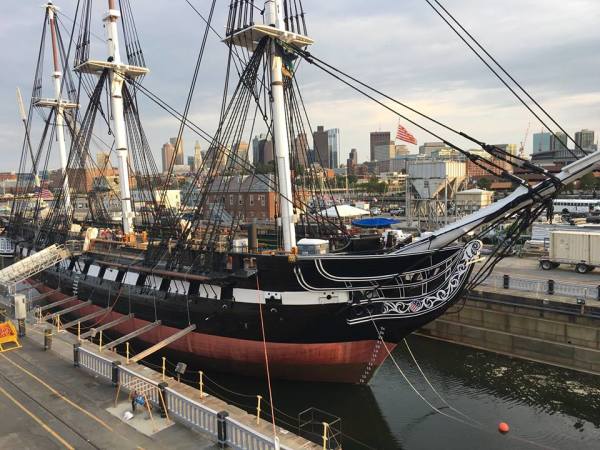 Old Ironsides touched her native Boston waters once again Sunday evening. A full moon reflected the highest tides of the season as the 219-year-old warship pulled out of a flooded dry dock in Charlestown Navy Yard.

A large crowd gathered around Dry Dock 1 in the Navy Yard, the country's second-oldest dry dock, built in 1833. After 26 months of heavy restorations, the shiny, restored warship returned to Boston waters in a slow undocking process.

“It went perfectly,” said Historian Margherita M. Desy, an expert on all things Ironsides. “When you plan and you know what you're doing, it goes on flawlessly, and that's what we had tonight.”

USS Constitution is ready to leave Dry Dock 1 at the Charlestown Navy Yard. Over the past 26-months, Constitution has undergone an extensive restoration that will help to preserve America's Ship of State for many decades to come.U.S. Navy photo

Desy said through the USS Constitution Museum's social media pages, thousands of people across the world tuned in to the undocking event.

Those tuning in may have seen the hundreds of spectators cheering and singing patriotic tunes, waiting hours for the grand undocking spectacle. Despite starting a half hour earlier than planned, an illuminated USS Constitution officially crossed the sill (where a modern caisson is usually stationed to block out ocean waters) right on time at 11:30p.m., according to Desy.

Just as the ship began to move, crews had to pause the operation for several minutes as a member of the undocking team was transported for a medical emergency.

The individual was not aboard the ship, but standing in the Navy Yard viewing area when the emergency occurred. Lieutenant Commander Tim Anderson, Executive Officer of the USS Constitution, said the individual was a military member and appeared to be recovering well. The ship continued to slowly move along following the medical response.

Old Ironsides, whose nickname honors the ship's proud performance in the War of 1812, boasts being the oldest commissioned naval vessel afloat. The $12-15 million restoration project breathed life into the historic landmark operated by the U.S. Navy and the Naval History & Heritage Command Detachment Boston.

Since May 18, 2015, crews have applied much more than elbow grease to the American landmark: besides the removal and replacement of the lower hull's copper sheathing, crews caulked various planks and the ship's keel (the bottommost part of the ship) with coveted white oak timber.

The ship's bow (or “cutwater”) was inspected and restored, support shoring and scaffolding were installed and a few other restorative measures were completed to ensure Old Ironsides was capable of hosting an estimated 10 million or so more tourists in the next two decades, when she is likely to be worked upon again.

Organizers said the high tide helps ensure there is enough water to allow the ship to float. The Dry Dock was flooded steadily over several hours as crews inspected the ship to ensure operations flowed smoothly.

And smoothly she sailed, right into Pier 1 East in the Navy Yard, where Old Ironsides will remain for the rest of the summer season.