"Those symbols mean a lot to me ... But at the same time, I took an oath to defend the Constitution, which includes the First Amendment, freedom of speech, freedom of expression" 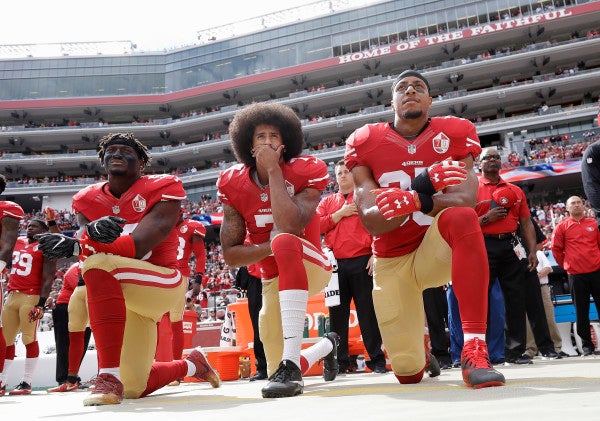 (Reuters) – A former member of the U.S. Army Special Forces who advised Colin Kaepernick that kneeling during the national anthem would be a more respectful protest than remaining seated on the bench says he had no idea the gesture would become so controversial.

Nate Boyer, who served six years in the Army and also tried out for Seattle as a long snapper, met with Kaepernick in 2016 when the then-San Francisco quarterback began his protests aimed at drawing attention to police brutality against minorities.

Boyer had written a piece in the Army Times about the protests, which involved the quarterback sitting on the sidelines during the customary pre-game airing of the anthem, and said Kaepernick sought him out for advice.

“The thoughts that ran through my head about kneeling were of pictures in the history books of somebody kneeling before the king to be knighted, somebody proposing to their wife, taking a knee to pray in the Catholic Church,” Boyd told Reuters.

“I just couldn't think in any way that it could be construed as disrespectful.”

Many did find it disrespectful, however.

U.S. President Donald Trump described it as “unpatriotic” and in 2017 Vice President Mike Pence walked out of an NFL game when some of the players knelt on the sidelines.

Kaepernick filed a grievance against the league in 2017 claiming collusion as no teams signed him after he parted ways with the 49ers. The NFL and Kaepernick settled in 2019.

The issue has returned to the fore in the wake of the killing of George Floyd, a black man in Minneapolis who died after a white police officer kneeled on his neck for nearly nine minutes.

On Friday, NFL Commissioner Roger Goodell said the league made mistakes in not listening to players and denounced racism in the United States.

Boyer said he understands why many consider the playing of the anthem before sporting events as sacred.

“Those symbols mean a lot to me,” Boyer said.

“But at the same time, I took an oath to defend the Constitution, which includes the First Amendment, freedom of speech, freedom of expression.”

Boyer said Kaepernick would go down in history as a galvanizing force for racial equality.

“He was standing up for —or taking a knee for — millions and millions of people that don't have the platform and don't have a voice.”