Report: US Troops Were Pursuing High-Value Target Prior To Deadly Niger Ambush

New details from U.S. intelligence officials and a survivor of the deadly ambush near the Niger-Mali border that killed four... 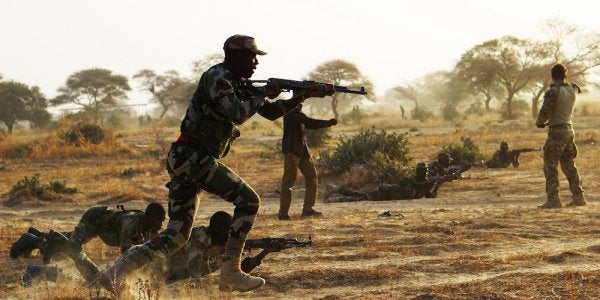 New details from U.S. intelligence officials and a survivor of the deadly ambush near the Niger-Mali border that killed four U.S. service members shine a light on an incident that has created a political firestorm in Washington.

What was supposed to be a reconnaissance mission to meet with local elders shifted to a kill-or-capture operation, taking them out on a mission for over 24 hours, according to an intelligence official in an ABC News report.

“They should have been up and back in a day,” the official told ABC News on Oct. 24. “Because they were up there so f—— long on a mission that morphed, they were spotted, surveilled and ultimately hit.”

A Nigerien soldier provides rear security for his squad while they performed a dismounted patrol during Exercise Flintlock 2017 in Diffa, Niger, March 11, 2017.Photo via DoD

As the 12-person Special Forces detachment and 30 Nigerien partner forces embarked on their mission on the morning of Oct. 3, they received intelligence reports that contact with an enemy force was “unlikely,” Chairman of the Joint Chiefs of Staff Gen. Joseph Dunford said during a press conference on Oct. 23.

When the U.S. troops were heading back to base, however, they received a call to kill or capture a target that was considered to be one of the “top three objectives in Niger,” several intelligence sources told ABC News. Codenamed “Naylor Road,” the target was affiliated with Al Qaeda and ISIS, ABC News reported. Dunford also confirmed on Monday that a group of ISIS-affiliated tribal fighters attacked the US troops.

A second Special Forces team was supposed to meet with the original team for the revised mission, ABC News said. When the second team was unable to do so, the original team was ordered to continue their mission — which resulted in nothing substantial.

The team eventually stopped at a village on the morning of Oct. 4, where a village elder was “obviously and deliberately trying to stall them” by displaying an ill child to the troops and grabbing a goat to prepare for them, sources told ABC News. When the troops departed, they came under fire from militants, the survivor of the battle said.

The survivor also praised the bravery of Sgt. La David Johnson, one of the soldiers killed during the battle, according to ABC News.

“Without a doubt, his courage and bravery in action that day were above and beyond expectation,” the survivor said. “He died fighting for his brothers on his team. You can quote that verbatim.”

“He grabbed any and every weapon available to him,” the survivor added. “The guy is a true war hero.”

Nigerien sources also suggested that U.S. troops were tracking down an ISIS-affiliated target and were intentionally delayed, according to a Voice of America report.

But Moussa Askar, a specialist in terrorism in Africa's Sahel region who was briefed on the attack by defense officials, said a fake terror attack took place nearby, to which U.S. forces responded. There, the troops were ambushed by militants with automatic rifles and heavy weaponry.

Despite the initial intelligence assessment before the troops set off on their mission, locals have painted a bleaker picture of performing military operations in the area.

Related: How The Media Is Making The Situation In Niger Worse »

“The attackers, the bandits, the terrorists have never lacked accomplices among local populations,” Almou Hassane, the mayor of the village near which U.S. troops were attacked, told Voice of America. Following the attack, the village chief was reportedly arrested and placed in government custody.

Around 800 U.S. troops are operating in Niger, along with 4,000 French troops in West Africa, according to Dunford. US forces have reportedly been in the region for more than 20 years and are stationed there to “defeat violent extremism in Africa,” in addition to dealing with the “global threat with foreign fighters, Dunford said on Monday.

“This area is inherently dangerous,” Dunford said. “We're there because ISIS and Al Qaeda are operating in that area.”