Report: Fallen Soldier May Have Been Kidnapped By ISIS Before Death In Niger

Sgt. La David Johnson, one of the four American soldiers killed in an ambush in Niger last month, may have... 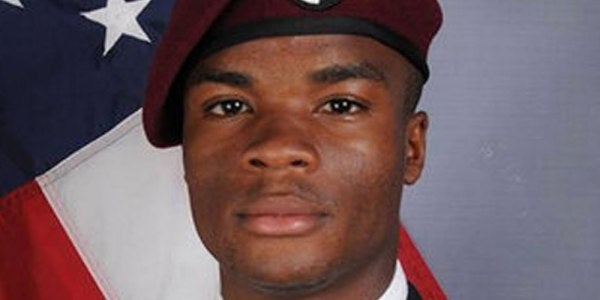 Sgt. La David Johnson, one of the four American soldiers killed in an ambush in Niger last month, may have been kidnapped by Islamic State militants before he was killed, CBS News reported on Nov. 3.

Johnson, 25, was one of four soldiers killed Oct. 4 after they were hit by gunfire near the village of Tongo Tongo. Three of the soldiers’ bodies were recovered quickly, but Johnson’s was not for nearly 48 hours.

Nigerien sources said that Johnson’s body —which was found in bushes about half a mile from his fellow troops two days later — had been shot and his hands roped together, suggesting he had been captured.

Related: ‘The Message From Mattis Is Basically Square Your Shit’: DoD Scrambles For Facts In Niger »

Johnson’s death, already surrounded by questions about how he had become separated from the other troops, also drew national attention last month when President Donald Trump’s condolence call to his widow was criticized by his family and Rep. Frederica Wilson, Democrat from Miami Gardens, as insensitive and callous.

The Pentagon declined to comment to CBS News. A U.S. official told Voice of America that there was “no indication” that Johnson was ever in the custody of hostile forces.

During the service, six of his fellow soldiers folded the American flag draped over his casket and presented it with two other folded flags to his widow and two children. An honor guard fired three volleys from rifles before Taps warbled over the crowd.

Sgt. Johnson grew up in Miami Gardens. Before he joined the Army in January 2014, it was where he found a second family, and where he met his childhood sweetheart and future wife, Myeshia.

And it was where — before he was killed Oct. 4 in the ambush — he planned to return and raise his son and daughter, as well as another baby girl, due in January. He had been sent on his second deployment to Africa in August.