"This book is not about the 160th or me, they are stories about our tribe, trials, and tribulations on and off the battlefield." 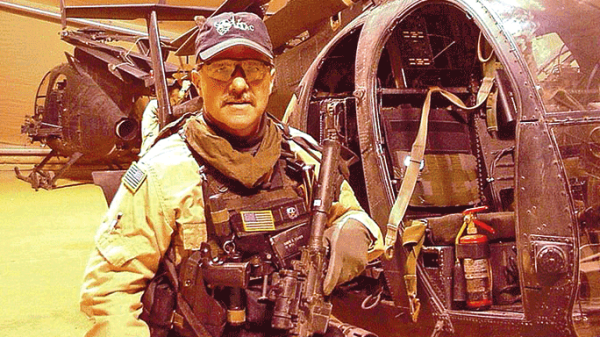 The Night Stalkers, officially known as the 160 Special Operations Aviation Regiment, are the best helicopter pilots and crews in the world. These are the crews who fly America’s top special operations units to combat. They can reach any target, plus or minus 30 seconds, as they take pride in saying. The Battle of Mogadishu, the Osama bin Laden mission, and the Abu Bakr al-Baghdadi raid are just some of their exploits that have made it through to the public.

However, despite their esteemed combat record and contribution to the American military history, there are very few books on the Night Stalkers. Consequently, the forthcoming publication of “Death Waits in the Dark,” by Chief Warrant Officer 4 (Retired) Greg Coker is indeed a rare opportunity to get a glimpse behind the scenes.

Coker served as an AH-6 Little Bird pilot through some historic moments. He was present in the initial operations in Afghanistan soon after 9/11. He flew during the Battle of Haditha Dam, where the Rangers faced extreme odds. He was shot down in Iraq, survived, and physically went after the insurgents who had destroyed his beloved attack helicopter.

Chief Coker’s book brings to life decades of special operations missions that hitherto were either unknown or unexplored.

“Death Waits in the Dark” is a fine collaboration if ever there was one. Chief Coker partnered with his good friend and former Delta Force operator Master Sergeant (Retired) George E. “Geo” Hand IV to pen a thrilling account of a Night Stalker at war and peace. The Night Stalkers and Delta Force share a tight bond. As a result, Geo is familiar with how they operate, and more importantly, how it feels to be on the receiving end of their services, whether that is transportation or close air support.

You can find info on pre-ordering the book here. All of the proceeds will be donated to help veterans, 1st responders and their families, and the church.

Sandboxx had the opportunity to ask Greg a few questions about his career and the book.

Sandboxx – What made you write the book?

Greg Coker – I have been thinking about writing a book for 15 years. God put me in so many places and as a storyteller, many of my buddies recommended writing a book. However, as the Quiet Professional, I did not want to be “that guy”. I have thought about writing many times over the years, prayed about this, my children told me I should write, my buddies would say ‘Gravy, if it ain’t written, it never happened.’ I thought about this a bunch. After several conversations with Geo over the years, he tricked me. “Coke, let’s just write one”. Then another, and another, ahhhhh you son of a gun!

I prayed about doing this for a long time and my wife one day says, “write your story for your children and your grandchildren”. “It’s your legacy,” Ok, I can run with that. I started a journal on 9-11 and wrote in it every day for 8 years thank God. Too many head injuries and TBI. So, I started to write with Geo helping me, and we completed the mission. I attacked this just like a mission and could stay focused, writing every day sending Geo 1 -2 chapters per day. He knew then that I was on a mission and serious. The rest of the story is in the book. God approved this.

SB – This is the first book about the 160th since Mike Durant’s account of the Black Hawk Down battle, do you feel any pressure about this?

GC – Mike did a great job of writing his books and his work on Black Hawk Down was phenomenal. They could not have told his story without Mike. This book is not about the 160th or me, they are stories about our tribe, trials, and tribulations on and off the battlefield. There has never been a book written about the Six Guns, there certainly should have been way before me. They are absolutely fearless, all of them, pilots, crew chiefs, dawgs. The best in the world.

No, I do not feel any pressure whatsoever.

SB – Considering the highly classified nature of the operations that the Night Stalkers conduct, did you receive any backlash for your community when writing this book?

GC – No backlash whatsoever. In fact, I spent many hours talking to several of the guys I served with, Rangers, Delta, Night Stalkers, and all of them told me to do it, it is a story that needs to be told. Several of the fellas that had written books said that there will always be those that disagree and that is ok. I was honored to work with Geo, we have known each other for a long time, worked together. God blessed me with Geo as he can put my thoughts down where folks can understand what I am trying to say and he has been there and knows what I have been through. He has the ability to transfer my emotions and thoughts.

SB – Any piece of advice for young men and women who are looking to join the military in general and the Night Stalkers in particular?

GC – I have mentored at least 20 young men since I retired and every one of them has gone to fly helicopters or enter Army special operations. I thought about that one day, I select the ones that I know will perform and never quit. I reckon I see myself in them 40 years ago. I am proud of helping these young men with their path. The Army is a great place to start, I did and found my home. I tell everyone that it is going to be hard, suppose to be, just never quit. Same for the 160th, be the best, work hard, and never quit. Ever!

It is extremely hard to get accepted into these specialized units and even harder to stay. You will never be colder, hotter, tired, or hungry, and you will look at your Ranger buddy and laugh about it.