"I used to be so timid, but now I won’t stop until I physically can’t go anymore.” 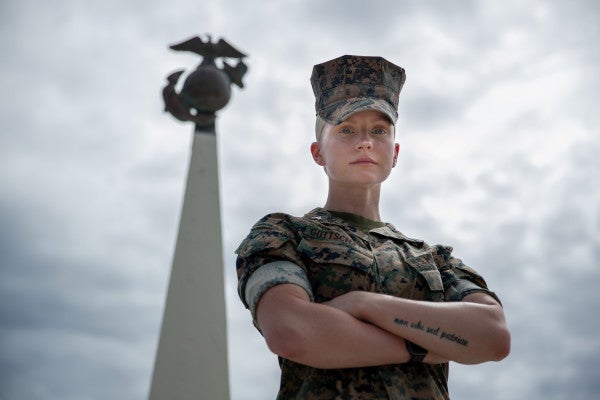 It’s that attitude and dedication that earned Cpl. Gottschalk a spot as an intelligence specialist with the 3rd Marine Division and has her continue to climb the ranks. An average day for Gottschalk now involves briefing high-ranking officials, including a two-star general.

“Something I want to do in my career is transition into the commissioned officer side,” she said.

Gottschalk’s interest in joining the military stems from her experience as a child. When she was 6, she and her younger brother were adopted from the Tyva Republic, in Russia, by Jeff and Janet Gottschalk, of Minster.

“I actually do remember being in the orphanage and getting placed into the organization,” she said. “I remember having families come and look at us and having my parents now come and look at us. The fact that we fit their mold, and they chose us, I feel extremely grateful for, especially because we were at the age gap where my brother and I were about to be separated.

“Russia in general as a whole is pretty restricted on what you can say and do,” she continued. “At the orphanage, we were in a system where you can’t really make your own decisions, don’t have family or a normal lifestyle. Coming over to the U.S. and being able to afford the basic necessities like going out and getting food or going and doing what you want when you want without having to tell someone was pretty significant.”

However, it wasn’t all smooth sailing when Gottschalk arrived in the small village of Minster. She had to learn a new language and figure out how to fit into a tight-knit community.

“She was 6 but everybody was saying, ‘You can’t put her straight into kindergarten, she doesn’t speak a lick of English, she doesn’t understand anything,’” Jeff Gottschalk recalled. “We knew we couldn’t wait until she was 7 though, so we were just going to immerse her in it. The school had to hire a translator, who worked with her for about two weeks and then finally called and said, ‘She doesn’t need my help anymore. She is picking this up in no time.’”

“I would definitely say that I had a unique experience coming into Minster. I never really fit the mold or I guess the standard Minster individual of the kids my age growing up,” Nika Gottschalk said. “I always just kind of did my own thing but also participated in high school actively in different clubs and playing sports. That’s how I interacted with my peers, but my experience was unique coming in not speaking the same language and still trying to communicate and make friends.”

By eighth grade, she had decided she wanted to graduate early and did so after her junior year of high school. She knew right away that she wanted to pursue a career in the military, but two ACL tears during competitive cheer almost ruined her chance.

Nika Gottschalk had to have two surgeries on her left knee before graduating and was initially declined into the military. Her family appealed the decision, which took about six months to process. To avoid being sedentary while she awaited an answer, she and her family began looking into college. She received a scholarship to attend the University of Dayton, where she began to study biology.

“My first semester on campus was when I decided to go ahead and enlist. I felt like I was missing that sense of purpose,” she said. “I was going the officer route, but I wanted to go now to make a difference.”

She scored high enough on her ASVAB Test — which stands for Armed Services Vocational Aptitude Battery — that she could essentially pursue any military career of her choosing.

“I decided to choose intel just because of all the opportunities that it afforded. It’s mentally stimulating and it’s physically challenging to balance out and make me a well-rounded individual.”

After finishing boot camp, a month of Marine combat training and her intel training, she was stationed in Okinawa, Japan, where she remains today. In September, she will be transferring to North Carolina.

“When I was a brand new Marine, I experienced a lot of harassment and a lot of negative attention just from males because of my looks — because I’m blonde-haired and blue-eyed,” Nika Gottschalk explained. “I know who I am, what I mean and what standards I meet and surpass, so I don’t worry about it too much now. … It’s always an uphill battle. The Marine Corps has gotten a lot better, but we are far from where we need to be. I have female friends who have gotten out of it due to sexual assault, PTSD from that and issues because of harassment. It’s a sad thing to go through as an organization that prides itself upon brotherhood and sisterhood.”

She has become what even she describes as an “aggressive female” nowadays, becoming a person who isn’t afraid to speak up when she or others are being treated unfairly.

“I have my own opinion, and I’m not afraid to voice it. I don’t care what rank you are, you will respect me, and I will tell you if you’ve infringed upon my rights or other’s rights, and that deters people from picking on me. As a female, you go through a lot of discrimination and harassment. You get told you’re only here because you’re a female or called the center of attention because you’re pretty and blonde so people like you. I hear it on a daily basis.”

As a noncommissioned officer, she’s made it her job to make sure her junior Marines aren’t getting the same treatment. All while still trying to break her own glass ceiling.

“Here in the next few weeks, unless something comes up, I’m going to do the basic recon screening. There’s only one other female recon Marine, and she just made it at the beginning of the year,” Nika Gottschalk said. “I want to show that, regardless of gender, if you put your mind on and continue to work at something whether it’s an inch, yard, mile or years in advance, if you put in that work, you can definitely reach wherever you want to be.

“I love to be aggressive and meet the male standards. I love beating them — running faster, outlifting them and outperforming them. It’s something that drives me every day. I used to be so timid, but now I won’t stop until I physically can’t go anymore.”

“She’s definitely a lot tougher than I thought she’d ever be,” her father said. “When she was younger and we’d throw around like a volleyball-sized ball she couldn’t even catch it, she didn’t have the physical strength. It’s amazing what she’s built herself into.”

One day, Nika Gottschalk would like to return to Russia to find her biological parents and see more of where she’s from, but for now, her focus is on her success and the family that helped get her to it.