The USS Nimitz aircraft carrier and its accompanying strike group of destroyers have left the Middle East, where they had... 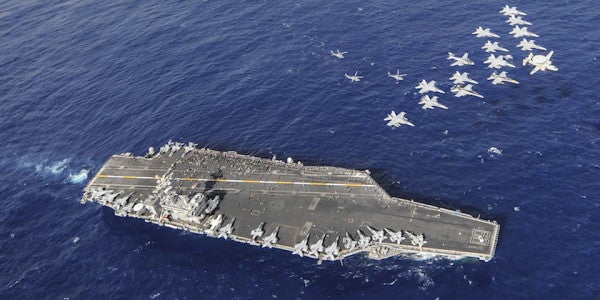 The USS Nimitz aircraft carrier and its accompanying strike group of destroyers have left the Middle East, where they had launched airstrikes against ISIS, to back up U.S. forces in the Pacific, the Navy announced on Oct. 25.

The Navy says the Nimitz is heading to the Pacific on a previously scheduled visit, but it will be the third carrier in the region joining the USS Ronald Reagan, which stays in Japan year-round, and the USS Theodore Roosevelt, which is currently in the Pacific well east of Japan.

According to the Navy, the Nimitz just finished three months fighting ISIS, with over 903 bombs dropped. ISIS fighters are now surrendering en masse as U.S.-backed regional forces close in on them.

Gen. Jeong Kyeong-doo, chairman of South Korea's Joint Chiefs of Staff, and U.S. Forces Korea chief Army Gen. Vincent Brooks met aboard the Reagan after the drills, with Jeong saying that the carrier sent a “strong warning” to North Korea “amid an unprecedentedly grave security situation,” according to Yonhap news.

The U.S., South Korea, and Japan just concluded a missile-defense drill near Korea with their cutting-edge naval-defense platforms. The drill focused on improving situational awareness and readiness while North Korea threatens to send more missiles flying over Japan.

Despite North Korea's talk of firing missiles at Guam or into the Pacific, the country remains quiet. Pyongyang hasn't launched a missile in over a month, marking the longest period of relative quiet since its first missile launch in February.

But a recent report states that North Korea has remained resolute and unwilling to talk to the U.S.. Meanwhile, President Donald Trump seems intent on hinting at the possibility of war whenever possible.