‘We won’t do it!’ — A North Carolina city is suing to take down a massive American flag

Just in time for Memorial Day, one North Carolina city has filed a lawsuit to force an RV store to pull down a 40-foot by 80-foot U.S. flag because it's too large 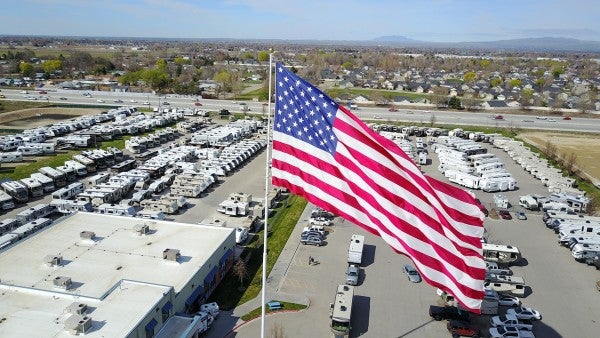 Just in time for Memorial Day, one North Carolina city has filed a lawsuit to force an RV store to pull down a 40-foot by 80-foot U.S. flag because it's too large, reports WBTV and other news outlets.

To put the 3,200-square-foot size in perspective, that's about 1,000 square feet bigger than the average Starbucks.

Statesville, N.C., officials say the U.S. flag at Gander RV is nearly twice the size of what is specified in city codes for “signs and other outdoor marketing devices,” says WBTV.

Gander RV, an outdoor living equipment dealer, posted news of the lawsuit on its Facebook page May 18, and said the city is “imposing” a $50 per day retroactive fine, dating back to October 15. That's when the flag went up, the store says.

“Many cities like Statesville have requested that Camping World and Gander Outdoors take down their American flags,” said the post, now shared 5,200 times.

Statesville officials told Fox 46 that Gander RV was granted a permit to fly a U.S. flag, but the business raised one much larger than allowed. City codes say flags cannot be larger than 25 feet by 40 feet if they are flown within 100 feet of a highway, reports WSOC.

Thousands have also commented on Gander RV's defiant Facebook post, and nearly all appear to be supportive of a keeping the flag up — “the bigger the better.”

“I don't care if it's large enough to be seen from space! I question the morals and honor of the folks who run the city if they want to enforce this,” posted Glen Sexton. “Change your own ordinance because it's ridiculous to start with.”

“Someone needs to file a lawsuit against the city for being Anti American,” posted Steven Schack on the Gander RV Facebook page. “What is this county coming too! My God!”

“Stand tall, proud, and don't back down to anything or anyone that disapproves of the flying of Old Glory,” wrote Haig Zeytoonian. “She was paid for with the blood of millions. God Bless America.”