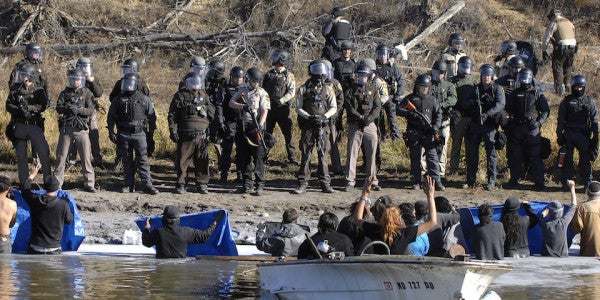 However, several groups representing North Dakota veterans have issued a plea for them not to join the protest.

“Our fear is that an aggressive stance could escalate an already sensitive situation and it could have veterans confronting other veterans and that’s not right; It’s a concern,” Dave A. Johnson, North Dakota’s American Legion department adjutant, told Task & Purpose.

On Dec. 1, as thousands of veterans set out for North Dakota, the Veterans Coordinating Council — made up of the state chapters from the American Legion, AMVETS, Disabled American Veterans, Veterans of Foreign War, and the Vietnam Veterans of America — sent a letter to “Veterans Stand for Standing Rock.”

In it, the commanders and adjutants of the five North Dakota veteran service organizations issued a joint statement on behalf of their members, urging “veterans to stay clear of all activities or assemblies involving the DAPL in support of neither the protesters nor the law enforcement officers as adding more people to the area only creates more tension which increases the burden on the law enforcement and military forces on the ground.”

Johnson stated that the veteran service organizations have no political stance regarding the pipeline. The 20-year Navy veteran, said he is worried that veteran protesters may find themselves squaring off against local and federal law enforcement, many of whom also served in the military, and that a confrontation with police could be dangerous and may mar the image of veterans.

Johnson did note, however, that some North Dakota veterans from their chapter will be at the protest.

“I just got off the phone with one of our Native American adjutants with one of the tribes up in north-central Dakota, and he’s got members that are going down there as Native Americans and veterans, and they’re going to wear their veteran ballcaps,” said Johnson. “I said absolutely. … Go out peacefully, but if it becomes aggressive, get the hell out of there because this is not going to be good.”

Clashes between protesters and police have already occurred, and there have been 575 arrests since August. Protesters have also complained of excessive force on the part of law enforcement, including the use of water hoses in 30-degree weather during a confrontation in November.

The influx of 2,000 more protesters, broken into companies and platoons, could add to the tension. However, the group’s military rhetoric may have less to do with intent and more to do with the shared identity of the veteran protesters. The veterans joining the protest have repeatedly stated their intention to demonstrate peacefully.

“We’re not going out there to get in a fight with anyone,” said Wes Clark Jr., one of the group's main organizers in an interview Task & Purpose’s Adam Linehan. “They can feel free to beat us up, but we’re 100% nonviolence.”

For the North Dakota Veterans Coordinating Council, one of the biggest concerns is seeing veterans squaring off from opposite banks of the river.

“I know this group has said they want to do it peacefully, but one big concern is they’re going to be standing there, facing off with law enforcement there,” said Lonnie Wangen, the North Dakota Department of Veteran Affairs commissioner.

“Many of the police and guard members that are out there are wartime veterans themselves,” explained Wangen, who served 27 years in the Army National Guard. “To look across the concertina wire out there at these other veterans is going to be disheartening to them also.”