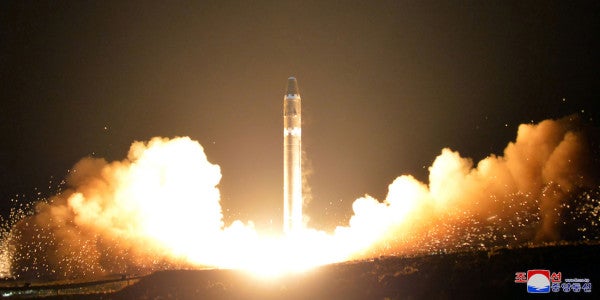 The report said the testing involves ensuring the anthrax survives the immense temperatures generated during re-entry into the Earth’s atmosphere. North Korea has a stockpile of between 2,500 tons to 5,000 tons of chemical weapons, and is capable of producing biological agents such as anthrax and smallpox, South Korea has previously said.

The Asahi report comes a day after the White House published its National Security Strategy, a document that said Pyongyang is “pursuing chemical and biological weapons which could also be delivered by missile.”

“North Korea — a country that starves its own people — has spent hundreds of millions of dollars on nuclear, chemical and biological weapons that could threaten our homeland,” the report said.

North Korea claimed it had completed its nuclear force after it fired a new Hwasong-15 ICBM in late November. South Korea assessed the missile — North Korea’s largest yet — could potentially fly 13,000 kilometers (about 8,000 miles) and reach Washington, though additional analysis was needed to determine whether it was capable of re-entry.