A new video that calls U.S. forces “perverted animals” and portrayed them under attack was uploaded on a YouTube account... 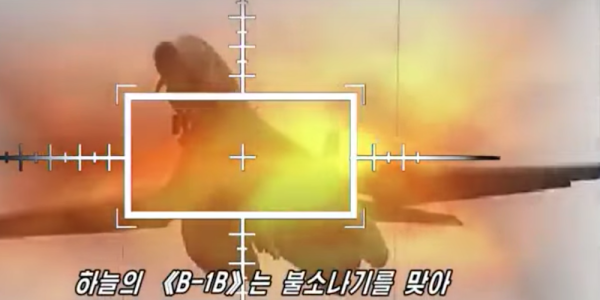 A new video that calls U.S. forces “perverted animals” and portrayed them under attack was uploaded on a YouTube account run by North Korean propagandists.

In the video published Saturday, still photos of an aircraft carrier, reportedly the USS Carl Vinson, and a B-1B bomber can be seen in simulated flames, with a patriotic speech playing over the footage, under North Korea's characteristically stern tone.

Additionally, photos of U.S. and South Korean forces are displayed, presumably in their annual joint military exercises that take place this time of year.

The narrator in the video declares that “a knife will be stabbed into the throat of the carrier,” and that “the bomber will fall from the sky after getting hit by a hail of fire,” Japan Times reported.

The still photos used in the video resemble photo packages produced by professional news organizations, such as Reuters. Further, there also seems to be an image that bears some semblance to real-time strategy video games.

The same propaganda network was scrutinized in 2013 for a video that placed virtual crosshairs over the U.S. Capitol building and portrayed simulated attacks on New York and Washington.

The video was uploaded shortly after Secretary of State Rex Tillerson traveled to South Korea for the first time as the U.S.'s top diplomat, who recently said, “the threat of North Korea is imminent.” Much to North Korea's chagrin, annual military exercises involving 17,000 US troops and the Terminal High Altitude Area Defense system are also being conducted in South Korea.

North Korea has a storied history of using inflammatory verbiage in their broadcasts, often targeting their southern counterpart and the United States.